We're reflecting on LGBT+ History Month 2021 at Oxford. The month provides the opportunity to increase the visibility of lesbian, gay, bisexual and transgender (LGBT+) people, their history, lives and their experiences. In celebration, we’ve collated a series of stories from some of our famous LGBT+ alumni, Oxford's LGBT+ lectures and podcasts and some further resources and support to share with you.

Irish Playwright and Poet Oscar Wilde studied at Magdalen College, Oxford from 1874 until 1878 where he read Classics. With long hair and flamboyant dress he later became known for his role within the aesthetic and decadent movements. Upon graduating he wrote to a friend “The dons are 'astonied' beyond words – the Bad Boy doing so well in the end!”.

Some of his most famous works include the Picture of Dorian Gray and The Importance of Being Earnest but during his short life he wrote over 24 plays, novels and poems.

Wilde’s relationship with Lord Alfred Douglas and the libel case Wilde brought against Douglas’s father the Marquess of Queensberry, led to Wilde being imprisoned for “gross indecency” for three years. While this libel case caused ruin for Wilde and he died not long after in 1900, his trials brought the topic of homosexuality into the public sphere. A topic that had rarely been spoken about in prudish Victorian society until that point.

In 2017 Wilde was among more than 50,000 men who were posthumously pardoned under the Alan Turing Law (officially named the Policing and Crime Act 2017). At the time gay rights charity Stonewall said, "another important milestone of equality has been secured in law. The more equality is enshrined into our law books, the stronger our equality becomes, and the stronger we as a community become."

If you’d like to find out more about the life and legacy of Oscar Wilde there is an interesting article about him on the Alumni website.

Michael Dillon was the first person in the UK to undergo hormone treatment and surgery for a female to male transition between 1939 and 1949. Born Laura Maude Dillon, he attended The Society of Oxford Home-Students (now St Anne’s College) from 1934 to 1938, where he read Literae Humaniores (Classics or ‘Greats’).

During his time at Oxford, Dillon became a rowing Blue in his second year and was made president of the Oxford University Women’s Boat Club. He reportedly loved Oxford from the start of his time here and had many fond memories but distancing himself from his former life was an essential part of becoming who he wanted to be.

Dillon was continuously harassed by the press, both during his time at Oxford, and in his later life. This unwanted attention from the press eventually led Dillion into exile in India. He spent time with the Buddhist community in Sarnath where he was eventually ordained as a novice monk of the Gelukpa order, taking the name Lobzang Jivaka. His health failed, and he died in a hospital at Dalhousie, India, on 15 May 1962, aged 47.

While in exile, Dillon wrote four books and after his death, his brother, Sir Robert Dillon, said he wanted to burn Dillon's unpublished memoirs, but the manuscript was saved by Dillon's literary agent and Out of the Ordinary was published in 2017.

Read more about Dillon's life and time at Oxford on the St Anne's College website. The University's flagship LGBT+ lecture series launched in 2020 with The Michael Dillon LGBT+ Lectures with a discussion about LGBT+ rights.

Each year, the Equality and Diversity Unit and LGBT+ Staff Network host an annual lecture for LGBT+ History Month. This year's lecture is hosted by two Stonewall Sport Champions Michael Gunning, an international competitive swimmer and Corinne Humphreys, an international track and field athlete; leading LGBT people in sport who are determined to make sport everyone’s game. You can watch all of the previous LGBT+ History Month annual lectures online.

Explore the University's series of LGBT lectures, including What it means to be LGBT+ today, LGBT equality in the 21st Century and Being a working class queer in theatre.

To mark the launch of a flagship new University of Oxford lecture series, The Michael Dillon LGBT+ Lectures began with a discussion about LGBT+ rights, featuring a distinguished panel of guests. The lectures will be held twice annually and will be given by prominent LGBT+ individuals from outside of academia who have attained positions of outstanding achievement in their fields.

Join Richard Parkinson, Professor of Egyptology at Oxford as he speaks on LGBT heritage in world cultures, which he has researched for his book, A Little Gay History.

The University of Oxford LGBTQ+ Society

The Oxford LGBTQ+ Society is the largest higher education LGBTQ+ Society in the country, and with over 2500 members, the second largest society of its kind at the University. As a welfare society, they aim to cater to all students’ needs, whatever those may be. Their website has a range of resources, support information and events. You can also visit their Facebook page and read our Society Spotlight interview. 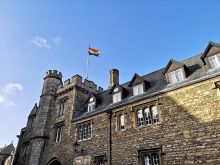 The University's Equality Policy provides for an inclusive environment which 'promotes equality, values diversity and maintains a working, learning and social environment in which the rights and dignity of all its staff and students are respected to assist them in reaching their full potential'. It also outlines that no student or member of staff will be treated less favorably on grounds which include sexual orientation and gender reassignment. You can find further information about the University’s work in the areas of gender, sexual orientation and transgender on the Equality and Diversity Unit website.