Professor Irene Tracey, CBE, FMedSci, became Vice-Chancellor of the University of Oxford on 1 January 2023. She was previously Warden of Merton College, Oxford, her alma mater. She is also Professor of Anaesthetic Neuroscience in the Nuffield Department of Clinical Neurosciences.

Irene did her undergraduate and graduate studies at the University of Oxford in Biochemistry under the supervision of Professor Sir George Radda. Her research focused on the early use of magnetic resonance imaging methods to study disease mechanisms in humans. She then held a postdoctoral position at Harvard Medical School working at the MGH-NMR (now Martinos) imaging centre. 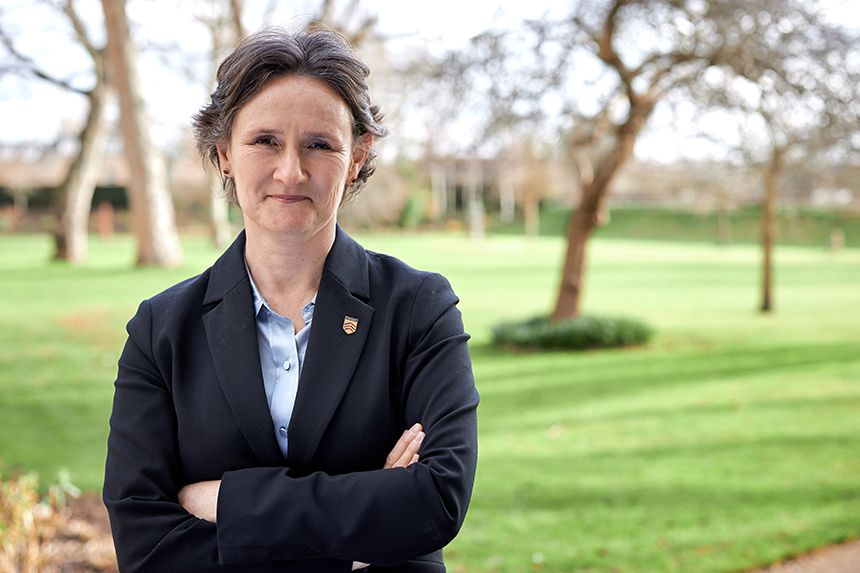 Professor Irene Tracey in the grounds of Merton College.

In 1997, Irene returned to Oxford and was a founding member of the Oxford Centre for Functional Magnetic Resonance Imaging of the Brain (FMRIB – now the world-leading Wellcome Centre for Integrative Neuroimaging); she was its director from 2005 until 2015. Irene was tenured in 2001 at what is now the Department of Physiology, Anatomy and Genetics with Studentship at Christ Church. From 2007 until 2019, Irene held the Nuffield Chair in Anaesthetic Sciences with Fellowship at Pembroke College, where she is an Honorary Fellow. From 2015 to 2019 she was also Head of the Nuffield Department of Clinical Neurosciences – a 550-person department of scientists and clinicians drawn from neurology, ophthalmology and anaesthetics. She will continue to teach undergraduate medics about pain and imaging through lectures and the occasional tutorial.

Alongside senior leadership roles within the University, Irene has served on many national and international committees, such as the International Association for the Study of Pain (IASP), British Neuroscience Association and Lundbeck Brain Prize Committee. She is on the Council of the Medical Research Council, and is President of the Federation of European Neuroscience Societies (FENS). She is a passionate advocate for women in science and is involved in several mentorship schemes.

Over the past 25 years her multidisciplinary research team has contributed to a better understanding of pain perception, pain relief and nociceptive processing within the injured and non-injured human central nervous system using advanced neuroimaging techniques and novel paradigm designs. They have also been investigating the neural basis of altered states of consciousness induced by anaesthetic agents.

Her work has both discovery and translational elements and has contributed to a fundamental change in how we view pain as an emergent experience not simply related to nociceptive inputs. Irene has successfully supervised over 35 DPhil (PhD) students from a range of basic science and clinical backgrounds, and supervised and mentored many postdoctoral (clinical and basic) fellows. Many of these former team members now have permanent faculty positions and professorships at prestigious institutions.

In 2008 she was awarded the triennial Patrick Wall Medal from the Royal College of Anaesthetists and in 2009 was made an FRCA for her contributions to the discipline. In 2015 she was elected a Fellow of the Academy of Medical Sciences and in 2017 won the Feldberg Foundation Prize, followed in 2018 by the British Neuroscience Association’s Outstanding Contribution to Neuroscience award. She has recently been made an Honorary Fellow of the Physiological Society. In the 2022 New Year’s Honours list, she was appointed by HM The Queen to a Commander of the Order of the British Empire (CBE) for services to Medical Research.

Professor Tracey is married to Professor Myles Allen and they have three children.