Dr Judith McKenzie’s convictions about the ‘intangible heritage’ vested in historic sites by those who live among them are shared by other Oxford academics. 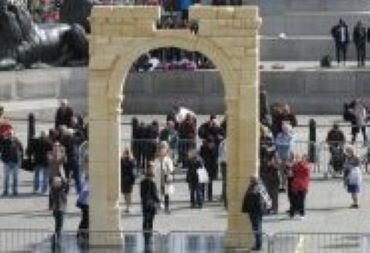 One-third size reconstruction of the centre part of one face of Palmyra’s Arch, at the foot of Nelson’s Column, Trafalgar Square, London, 2016

Images of devastation in Syria shown by Dr McKenzie ranged beyond Palmyra to parts of the city of Hama now utterly erased for political reasons, and to the mosques, souqs and churches that once knitted Aleppo’s communities together. Even the iconoclasm of IS – extending in Mosul, Iraq, to the destruction of items from ancient Sumeria – confirms the importance of heritage sites to those who live among them. By destroying monuments and relics, the militants aim not only to grab headlines and remove supposedly un-Islamic relics, but also to crush morale and erase local identity.

IS is not the only guilty party. Nor is the ideology of radical Islam the sole motivation for destruction of heritage. The devastation of old Aleppo predated the rise of IS and was carried out by all sides, according to Dr Ross Burns, whose time as Australian ambassador to Syria led him to write The Monuments of Syria and Aleppo: A History. ‘Virtually all parties to the fighting have sought to use the country’s monuments as either weapons or propaganda tools,’ he said.

The West is home to several prime examples of sites restored to their old aspect after being destroyed in war. The centre of Dresden is one, with baroque churches and galleries rising again where Allied firebombs left only smouldering ruins in 1944. The heart of Ypres is another, with the cathedral and market square once more standing as proud as they did before the First World War reduced the Belgian town to a ghost.

The Palmyra Arch is probably the most famous present-day icon of heritage destroyed in the Middle-Eastern war zones. Oxford University physicist Dr Alexy Karenowska led a team that last year created a one-third scale replica. She runs a University research group which is developing technology – especially photography and 3D-printing – for documenting and preserving cultural heritage and archaeological material. Her work on the replica was part of her spare-time role as director of technology at the independent Institute for Digital Archaeology (IDA), but it earned her an Early Career Researcher award in this year’s Vice-Chancellor’s Public Engagement with Research Awards, which celebrate public engagement work across Oxford University.

The replica was conceived by people in Syria – the IDA working closely with the Director-General of Antiquities and Museums there, Professor Maamoun Abdulkarim – and supported by UNESCO and the United Arab Emirates government. Karenowska’s team developed a three-dimensional computer model of the Arch by photogrammetry, which establishes precise surface measurements using photographs. This became the template for the state-of-the-art 3D machining process that produced the 13-tonne replica, in Egyptian marble, of the central opening of one side of the Arch. Karenowska has managed the installation of the replica in London, New York, Dubai and Florence in a tour to raise awareness of the loss to global heritage – it has now been seen by more than two-and-a-quarter million people.

She sees the Arch replica as a demonstration of how science can serve ‘art, beauty, human understanding, and humanity’, not just progress and technology. ‘It’s come to express connections between people in sympathy,’ she said. ‘It’s a gesture of hope, it’s a demonstration of how peace and positivity through human intervention can succeed over violent destruction.’ The educational value is inestimable, she argues – especially for children, whom it has reached in a way that textbooks cannot.

‘This is not black-and-white columns of data,’ said Karenowska. ‘It’s information that has an existence that transcends its physical reality and belongs to the people – whether it be the human race in general or individuals who might feel a particular attachment to a particular historical object.’

The replica is not without its detractors. In response to the declaration that the replica would ultimately ‘go home’ to Palmyra, the London Evening Standard opined: ‘Even if well intentioned, erecting Italian-cut Egyptian stone in the middle of Syria is about as far from authentic as you can get.’ The Factum Foundation for Digital Technology in Conservation has taken issue with its accuracy.

McKenzie points out that the whole arch was the most complex in the entire Roman empire, with its triangular footprint to smooth the angled intersection between two streets, and with exquisite friezes carved by Palmyene sculptors. She and Burns believe the Arch should be rebuilt on its original site, at full scale, using local materials. It could not, of course, be the original piece of antiquity, which is irrevocably gone, and such projects rightly provoke debates about authenticity in the preservation of antiquities. But it would bear witness to nearly 1,800 years of the original’s existence, would allow visitors to Palmyra to see what has been seen before, and might stand for many lifetimes. And as the best way to bring income to the local population and to restore the Arch’s role in Syria’s national identity, McKenzie and Burns argue, that job of rebuilding should be done by Syrian artisans.

Panellists at the Oxford HERITAGE conference were united in condemning the view that only the West has the expertise and sagacity to look after sites and objects of global historic significance. ‘That thinking is so old hat,’ Burns said in his presentation. ‘These are buildings that Syrians themselves visited by the tens of thousands on the weekends before the war. They know what they’re worth. It’s very important that we keep that at the top of our agenda when we look at the question of reconstruction.’

There are anxieties that if reconstruction is done by citizens of war-wracked nations it will favour one particular faith and facet of history at the expense of others. But Edmund Herzig reports that in Afghanistan, the predominantly Muslim restorers have paid particular attention to Buddhist relics, recognising that these are the part of the national narrative that distinguishes the country from its neighbours. He added: ‘They are much more anti-Taliban than we are [in Britain]. Their ambivalence towards an Islamising agenda is probably stronger than mine.’ Photographs from the museum at Ma‘arat an-Nu‘man, north-west Syria, testify to a similar spirit, with workers and volunteers stacking sandbags to protect the fifth-century Christian mosaics.

Commercial reconstruction and expansion may seem more pressing – yet in Britain, as EAMENA’s Robert Bewley pointed out, the heritage sector is now the third largest employer, ‘so we ignore heritage at our peril, purely from an economic point of view.’ Bewley cited anecdotal reports that when outside aid agencies asked Iraqis unhomed by an earthquake what the most important thing to do was, they said, ‘Rebuild our citadel.’

Related websites
Dr Judith McKenzie
Dr Alexy Karenowska
EAMENA
Institute for Digital Archaeology
Dubai Museum of the Future Foundation
"These are buildings that Syrians themselves visited by the tens of thousands on the weekends before the war. They know what they’re worth."

Why Oxford archaeologists dream of seeing the Palmyra Arch rebuilt by Syrians.
Lighthouse in a Storm
Archaeology from Above
People on the Ground