One timely innovation by Oxford University is offering a second life for historic monuments and other heritage sites destroyed in current conflicts in the Middle East and beyond. 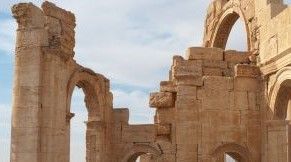 Side view of Palmyra’s Monumental Arch, in 2009.
Manar al-Athar, a databank of photographs taken by archaeologists and art historians, was conceived by Dr Judith McKenzie just before the region plunged into destruction. It now carries some 30,000 photographs, with a large and ever-growing archive still being uploaded.

Crucially it aims to help archaeologists from the stricken countries study their own national heritage – and to help them boost appreciation there not only of lost treasures, but of the ones that survive. The name, literally ‘Guide to Archaeology’ in Arabic, implies much more. In Egypt manar denotes Alexandria’s lighthouse, the wonder of the ancient world that gave the Islamic minaret its form and name. Through photography (literally ‘drawing with light’ in Greek), the site illuminates the past and provides a beacon for the future.

The idea came to McKenzie in 2009–10 when she was working in the Middle East with local archaeologists unable to visit historic sites of their heritage because of politics or war. By the time the pilot Manar al-Athar website had been launched in 2013, Muammar Gaddafi had fallen, Libya was on the brink of further violence, and Syria was eye-deep in hell.

‘We didn’t know there was going to be this tragedy of war,’ McKenzie said. ‘The website has had an unintentional usefulness in recording a lot of material that it’s no longer possible to get at, and things that have since been destroyed. We have important records for the future.’

The site is in both English and Arabic, with no paywalls or copyright restrictions. The images can be downloaded free, without form-filling, in multiple sizes fit for teaching and publication alike. An honour system stipulates only that credit be given. Unlike the unreliable amateur or automated information available on online image resources such as Instagram and Google Images, Manar al-Athar’s photographs are labelled meticulously by researchers with access to the unparallelled art history and ancient history collections at Oxford’s Sackler Library. The images are edited and carefully sequenced to show visually the context of details. Research is critical to identifying important features to record, and their significance.

The website was populated first with images from McKenzie and Neil McLynn’s Leverhulme Trust funded project on the transformation of sacred spaces in Egypt and the Holy Land from pagan to Christian to Islamic. With additional funding from a John Fell OUP Research Grant, the British Academy and elsewhere, further image sets have come from former Australian ambassador to Syria Dr Ross Burns, Harvard Semitic Museum’s Dr Joseph Greene, Canberra art historian Professor Michael Greenhalgh and Oxford colleagues such as Professor Andrew Wilson. More are coming from Oxford-based expeditions to Byzantine antiquities in the Caucasus and the Balkans, and from McKenzie’s European Research Council project on the monumental art of the Christian and Early Islamic East. Oxford’s resources are ‘critical to being able to do what we do’, said McKenzie.

The project could snowball. But labelling and uploading take time, and grant bodies favour active research rather than platforms like Manar-al-Athar which aim to support the research of the future. ‘With more resources we could do a lot more, a lot more quickly,’ said McKenzie, who has spent five years trying to balance research with ‘dead exhausting’ fund-finding.

McKenzie’s hope is that Manar-al-Athar’s Arabic–English bilingualism will set a new international standard. Ross Burns thinks peer institutions in Europe should emulate the Oxford ethos of outreach embodied in the website. ‘The tradition in a lot of the German and French universities is to keep all this information so no one gets it and publishes it first, but I don’t get that sense here,’ he said while visiting Oxford for a conference this year – HERITAGE: Rebuilding the Future from the Past – hosted by Oxford University’s Classics Faculty. ‘There’s much more of a mission to spread knowledge to a wider community – and by putting it into Arabic, to a community that includes the Arab world at large.’ The bilingual standard has been adopted by Burns for his own Monuments of Syria website, and by the website of an important Oxford-based aerial archaeology venture, EAMENA.

"The website has had an unintentional usefulness in recording a lot of material that it’s no longer possible to get at, and things that have since been destroyed."

Why Oxford archaeologists dream of seeing the Palmyra Arch rebuilt by Syrians.
Archaeology from Above
People on the Ground
Whose Heritage, Whose Reconstruction?