As Islamist militants are driven finally out of their captured strongholds, Oxford archaeologists have urged that the restoration of damaged historic sites be made a priority. 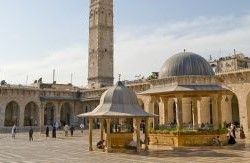 Aleppo, Umayyad (Great) Mosque courtyard in 2011.
Monuments and buildings such as the Palmyra Arch or the Great Mosque in Aleppo should be rebuilt with Syrian expertise and materials not only because of what they say about the ancient world, but also because of what they can do for the economic and spiritual well-being of local people.

When so-called Islamic State (IS) seized Palmyra in 2015, its militants beheaded the Syrian city’s 82-year-old archaeologist Khaled el-Asaad and destroyed the Temple of Bel that had stood there for 2,000 years, followed by the 1,800-year-old Roman Arch of Septimius Severus nearby. As international public outcry seemed to condemn the iconoclastic destruction more than the murder, ‘compassion fatigue’ was blamed. It is a debate that resurges every time historic heritage is blasted by war. But Oxford archaeologists and historians argue that it is misguided to weigh lives and buildings against each other like this.

‘The built environment is part of people’s identity,’ said Oxford classical archaeologist Dr Judith McKenzie. ‘Historic buildings are part of people’s culture, history, and memories. And handing down cultural heritage from past to future generations reaffirms identity.’ This is not a matter simply of bricks and mortar, but what she called ‘intangible heritage’ – the value that people and buildings have mutually generated across time.

Lighthouse in a Storm
Archaeology from Above
People on the Ground
Whose Heritage, Whose Reconstruction?