A pioneering project in Afghanistan saw Oxford academics starting to train a new generation of Afghan archaeologists in Kabul. 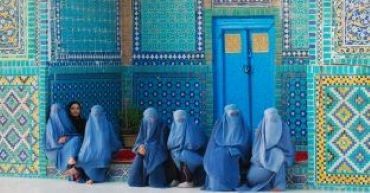 The Balkh Art and Cultural Heritage Project, which ran from 2011 with funds from the Leverhulme Trust, aimed to explore the heritage of the medieval site once known to Islamic authors as the ‘mother of cities’. But while the deteriorating security situation in Afghanistan made some of its research impossible, the collaboration with Afghan students was an inspiring example of how Western academia can help overcome the challenges faced by people in developing countries who are eager to learn.

On a tributary of the Oxus, Balkh was a nexus of trade and learning in the late antique and early Islamic periods. It was also the only primarily Buddhist city in late antiquity – with the largest stupa in West Asia – and was one of the places where New Persian culture and language emerged after the arrival of Islam. Sacked by the Mongols in medieval times, its site remains largely intact.

The Balkh project was truly collaborative. Led by Edmund Herzig, the Masoumeh and Fereydoon Soudavar Professor of Persian Studies at Oxford’s Faculty of Oriental Studies, it had his faculty colleague Dr Paul Wordsworth as lead archaeologist. The moving force was faculty associate Dr Arezou Azad, based at the University of Birmingham. The project involved partnerships with the Afghan National Museum, National Archive, Institute of Archaeology, Kabul museum and other bodies. The French Délégation Archéologique Française en Afghanistan provided a Kabul base.

Oxford also offered the kind of practical support without which an expedition to Afghanistan would have been prohibitively risky. ‘Oxford does have very good people working in it across the board – the people you need to deal with for insurance, safety and risk, research support of all kinds,’ said Herzig.

As well as conducting new research, a key aim was to build local capacity for more, in collaboration with Afghan heritage and cultural institutions. ‘We were very aware that Afghanistan, which for 40 years has been a war zone, was a place where this was desperately needed,’ Herzig told the HERITAGE conference. The trainees in Kabul consisted mostly of young enthusiasts, plus a few older people with some archaeological experience from the pre-Taliban era.

Scant resources imposed strictly practical limits. Students were directed to online resources in lieu of print course books. Basic training in cataloguing manuscripts was given at the Afghan National Archive by Dr Ali Mir-Ansari from the Centre for the Great Islamic Encyclopedia in Tehran, a visiting fellow at All Souls College, Oxford. Students were shown how to draw and describe objects.

For hands-on work such a coin cleaning, they were shown what could be done with a toothbrush and water. Most effective of all, although the worsening security situation prevented work in Balkh itself, students got to work on archaeological materials from the medieval city already collected at the French compound.

The training ‘proved to be the most rewarding part of the project’, Herzig said. ‘We gave this less than 10 per cent of our budget, and I wished we’d given it half. The reception from Afghan colleagues – simply from having the opportunity to work side-by-side in Afghanistan with western specialists using the methods we use – was really extraordinary; it was so much greater than the investment we put in.’

He urges other western archaeologists to build local training programmes into their future projects in the developing world. But he warns that such programmes also need to run longer than the two or three years imposed by the typical academic research funding cycle. Although the Balkh project was extended to four years to make up for security difficulties, ‘It was really a terrible waste to stop when we did, because we had actually just learnt how to work in this environment,’ said Herzig. ‘That is not a good way to build cultural heritage management for the future in a place like Afghanistan.’

"It was really a terrible waste to stop when we did, because we had actually just learnt how to work in this environment"

Why Oxford archaeologists dream of seeing the Palmyra Arch rebuilt by Syrians.
Lighthouse in a Storm
Archaeology from Above
Whose Heritage, Whose Reconstruction?