The vast scope of EAMENA – Endangered Archaeology in the Middle East and North Africa – belies its origins in a smaller venture to document the ancient heritage of Jordan from above.

Dr Robert Bewley, now project director at EAMENA, still co-directs and photographs for the Aerial Archaeology in Jordan project. ‘There was more than just discovery here,’ he said. ‘We were recording and monitoring the process of destruction.’ 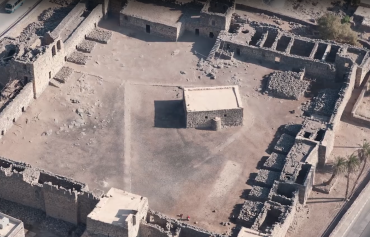 EAMENA aerial shot
EAMENA took off in 2015 thanks to a proposal from the Arcadia Fund to record endangered archaeology in the Middle East and North Africa. It is a massive exercise in aerial archaeology, a discipline still eyed with suspicion by some old-school archaeologists but which, in Bewley’s view, is the only way to document heritage across such a wide area before it is damaged irreparably. Based at Oxford’s School of Archaeology, partnered with Durham and Leicester, the £3.275 million project will run for at least three more years.

‘It’s hugely ambitious, but it’s exactly the right thing to do,’ said Bewley. A key goal is making EAMENA’s information accessible for free ‘to as many people as possible who can actually then do something with it’ – principally, the archaeologists of the 21 countries covered, from Mauritania to Iran.

Each site discovered through satellite imagery is marked on a digital aerial map, with information on the date and nature of the archaeology, and the kind of threat it faces. To counter the risk of looting, information for enquirers without archaeological credentials is strictly limited. Online access was launched in April 2017. Of the 150,000 sites already on the database, 20,000 are judged to be under threat.

Aerial images eloquently demonstrate the damage done by militants and by war. In 2011 Dura-Europos, an important Roman–Hellenistic site in Syria, looked virtually unchanged from the third century AD (apart from the excavations and spoil heaps of archaeologists). A 2015 photo shows a dense rash of pits dug by looters licensed by IS to raise money for its brutal campaigns. ‘The looting is on an industrial scale,’ Bewley told the HERITAGE conference.

Political chaos, too, can be a stimulus for destruction. A 2010 satellite photo from eastern Egypt shows small huts dating back to ancient mineworks. In another from three years later the landscape is barely recognisable. ‘Because of the financial crash in 2008 and a breakdown in law and order after the Arab Spring, mining companies bulldozed that area, at it became cost-effective to make money by selling precious metals as their value had increased.’

Yet Bewley warns that the chief threats to global archaeological heritage are urban development, infrastructure, dams, irrigation and (biggest of all) agriculture. EAMENA’s urgent priority is to tackle areas where major building works or infrastructure are planned.

On the upside, EAMENA is also revealing previously unremarked archaeological sites that are amazingly well preserved, with extraordinary features that beg to be understood. Bewley hopes the project will galvanise action internationally, nationally and locally to protect such sites. He urged the HERITAGE conference: ‘Let’s preserve them, and keep them preserved so the random railroad or bypass or town isn’t put there – or if it is, we can do an archaeological investigation in advance.’

Oxford’s name and connections count for much. ‘In the Middle East and Africa, if you say you’re from Oxford University they’ll at least have heard of it – and it has a good reputation.’ The idea is to use Oxford’s resources to help local experts in countries where archaeology is tragically underfunded and understaffed. ‘We want to build something for them which they couldn’t do on their own because of the conflicts in their countries or because there’s no infrastructure or no money.’

One key aim is to help national governments create their own archaeological inventories, as it is now doing with Yemen. EAMENA also aims to train 120 archaeologists throughout the Middle East and North Africa by 2020, with a £1.6 million grant from the UK Cultural Protection Fund. ‘That is the endgame – this is their information, archaeology, history,’ Bewley said. ‘The local community is absolutely crucial. Unless there are people on the ground who value what they’ve got, our work won’t have the benefit we’d like it to have.’

"The local community is absolutely crucial. Unless there are people on the ground who value what they’ve got, our work won’t have the benefit we’d like it to have."

Dr Robert Bewley - Co-founder and Project Director of the EAMENA project (Endangered Archaeology in the Middle East & North Africa), a project based at the University of Oxford in partnership with the University of Leicester and Durham University.

Why Oxford archaeologists dream of seeing the Palmyra Arch rebuilt by Syrians.
Lighthouse in a Storm
People on the Ground
Whose Heritage, Whose Reconstruction?