Enormous, elaborate and highly decorated, the Great Bookcase was made to hold art books in the London office of William Burges (1827–81), the eminent Victorian architect and designer.
(Credit: Ashmolean Museum)
Last updated
4 May 2022

You can choose to specialise in what you find most interesting from each side of the course, taking a range of options in English literature, and in ancient literature, history, philosophy, and linguistics. But the degree also integrates the two sides of its course, offering several papers designed specifically for the kind of comparative work that the course encourages. In the first year (second, for Course II), students take a paper in English literature of the sixteenth and seventeenth centuries – the period during which writers were most consistently and intensely engaged with the languages and literatures of ancient Greece and Rome. Among the highlights of the latter two years are the four ‘link papers’: all students take Epic, and read and compare authors such as Homer, Virgil, Milton, Alice Oswald, and Derek Walcott; and then choose to take either Comedy, Tragedy, or Reception (in which you study the reception of ancient literature in 20th-century poetry). (Students who choose to take up a second classical language in their second (third for Course II) year only take Epic.) The final-year dissertation allows students to pursue an independently devised topic with an expert supervisor, which may combine the subjects or focus on an aspect of one of them. All of the courses allow students to pursue the twists and turns of literary genres across time.

Oxford has a long and distinguished tradition of research and teaching in both Classics and English, and possesses remarkable library provision in both subjects. Oxford has the largest Classics department and programme of courses in the world, with outstanding teaching, library and museum resources, including the  Bodleian and Sackler Libraries, the Ashmolean Museum and a designated Classics Centre. The English Faculty is the largest English department in Britain. All Oxford colleges have tutors in English who are responsible for tutorial teaching (in groups of three students or fewer) in their own college. Many also give lectures to all students in the English Faculty. You therefore have the opportunity to learn from a wide range of specialist teachers. Library provision for English at Oxford is exceptionally good: all students have access to the Bodleian Library (with its extensive manuscript collection), the English Faculty Library, their own college libraries, and a wide range of electronic resources.

Interviews allow us to explore your enthusiasm for literature and the comparative aspects of the course, your response to new ideas and information, and your independent thinking and reading. We expect you to have read widely in English and classical literature (in translation or in the original), and to have an appetite for talking and writing about literature and approaches to it. However we are not looking for any reading in particular: we are interested in your own ideas, interests, and in seeing how you think.

Many graduates in Classics and English have entered a wide range of different fields such as teaching, the media, management consultancy, the law, finance, advertising, journalism, writing, librarianship, or have continued to further study in one or both subjects. 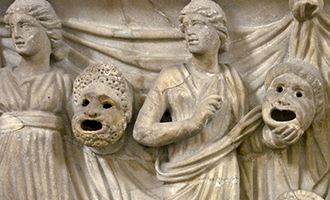 Want to find out more about the ancient world? Why not explore some websites which have excellent links to historical and archaeological materials, such as the British Museum or Oxford’s own Ashmolean Museum. You could also have a look at BBC Radio 4's archives, for example for the programme In Our Time which covers material from Ancient Greece and Ancient Rome. There are also many social media sites which you can have a look at such as Classics Confidential and Classics Outreach.