Since 2010, the University of Oxford has run a scheme to recognise inspirational teachers from UK schools and colleges.

This award scheme recognises the crucial role teachers play in encouraging talented students in their schools or colleges. Each academic year, current first-year Oxford undergraduates from UK state schools or colleges with a limited history of sending students to Oxford are asked if they would like to nominate an inspirational teacher.

The Inspirational Teachers Awards are a way of recognising the importance of school or college teachers in encouraging bright students to realise their potential and make a successful application to Oxford.

In 2020 the University of Oxford is honouring ten teachers with an award. All were nominated by students currently in their first year at Oxford.

Congratulations to all this year's winners and nominated teachers!

See all our previous winners on our Oxford People Videowall.

If you have any enquiries regarding the awards, please contact teachers@admin.ox.ac.uk 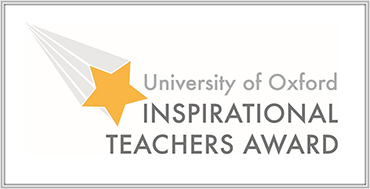 Aims of the Awards

To recognise the crucial role teachers play in encouraging talented students in their schools or colleges.

To encourage more applicants from students in schools with a limited history and tradition of sending students to Oxford.

When assessing the submissions, the panel were looking for inspirational teachers who:

“The Inspirational Teachers Awards recognise the vital work of teachers in encouraging students to realise their academic potential and make a successful application to Oxford – especially those who might not initially have believed Oxford was for them. Teachers motivate and inspire students with a huge range of abilities and interests, and this year’s winning teachers also showed clear faith in all their students. They have inspired students with their creativity and enthusiasm to be the best they possibly can be and deserve recognition for that above all.”

“Any Oxford academic will tell you that working with our lively, talented students is one of the most inspiring parts of the job. We know that, in turn, inspirational teachers have played a vital role in those students’ lives, helping them to build their intellectual confidence and passion for learning. These awards recognise some truly exceptional teachers, who have made a massive positive impact on their students. My warmest congratulations to all this year’s award recipients.”

“I have the privilege of working with teachers on a day-to day basis and therefore know what a difference inspirational teachers can make to the lives of those they educate. The teachers receiving these awards represent the very best of their profession; not only have they ensured that their students have fulfilled their academic potential, but they have also acted as exemplary role models, inspiring a passion for learning and demonstrating genuine concern for the young people in their care.  Those receiving these awards can be justifiably proud of what they have achieved.”

Nominate your inspirational teacher for an award.