'Each moment has sound, has a musical element to it. Those incidental sounds are randomly generated but can take on meaning within an artistic context. We have this sense that a piece of classical music is fixed by its score, that all representations of it are essentially predictable. But each performance is different; we, as musicians, performers or audience, bring ourselves to it on each occasion. I like to think of all music negotiating a path between predictability and unpredictability.'

What was your argument at the Randomness and Order conference about how these concepts apply to music?
The conference was introduced and chaired by the physicist Ian Walmsley. Ian talked from a quantum mechanical perspective about how randomness is inherent in the structure of the universe, so that was our starting point. It’s interesting to look at randomness through the lens of the arts. At one level, all art is an attempt to understand our place in that random world, to make sense, to ‘order’ it. But I chose also to think about how music can embrace randomness, whether in its creation, performance or understanding. I started, perhaps predictably, with John Cage’s 4’33”. (The score uses the word ‘tacet’, which is an instruction to orchestral players not to play for an entire movement.) It’s often called the ‘silent piece’, but it isn’t silent, despite the fact that nothing is played. There’s never nothing to hear: you might be able to hear your own heart beat, or – for example in this room – the buses outside.

I also spoke in my talk about certain composers who emerged after the Second World War, who used computers to generate musical material randomly. This was a whole new approach to ordering sounds, and so questioned the very nature of what music is, how it is created, how it can speak.

If you think about jazz, that’s always been improvised, it’s always sought a degree of randomness. But the distinction between classical and improvised music isn’t necessarily as black and white as we might think. Even Mozart experimented with rolling dice to generate pieces of music!

What’s your general research interest?
I’ve just finished writing a book on Igor Stravinsky as part of the Critical Lives series with Reaktion Press – a series of biographies that looks at the life and work of major modernist figures in the wider social and cultural contexts. Stravinsky lived through a period of extraordinary change – the Russian Revolution, two World Wars, many family tragedies – and I’ve tried to show how this forms the backdrop to his creative work. The idea of exile is an important theme running through the book. My challenge was to find ways of talking about Stravinsky’s music in a non-technical way for an interested but non-specialist readership.

Next year I have 12 months of research leave, when I take up the position of Research Associate at a research institute in Paris called IRCAM (L’Institut de Recherche et Coordination Acoustique/Musique) – a centre that brings together composers, performers, computer technicians and software developers. It was founded in the early 1970s, literally underneath the Centre Pompidou. I shall be exploring a phenomenon called ‘spectral music’, which emerged in the late 1960s, when composers were using computers to explore the very fundamentals of sound. I’m also interested in how this music plays into wider debates following the upheavals of May 1968.

Where did your love of and interest in music first develop?
I grew up in South Wales as part of an ordinary family. My mother taught piano and guitar. In those days there wasn’t much great professional music being made in Cardiff, with one very significant exception: Welsh National Opera. I had the great fortune to be selected as a boy treble to sing in Britten’s Billy Budd, and toured with the company to Barcelona. That was a turning point for me – it gave me a taste from the inside for exciting recent music. At the same time I was learning the piano. At 16 I discovered a brilliant teacher who made me think about music on a structural level. I remember him drawing shapes on my music score to demonstrate how different parts were connected, and he got me thinking about music in a new way.

What gives you most job satisfaction?
I think it’s got to be teaching – engaging with really bright students who keep you on your toes and who challenge your ideas. They help me clarify my ideas, as much as I hope I help them sharpen their thinking. At the same time it’s a great privilege to be given the time and space to pursue my own projects, as I shall be this coming year. There aren’t many jobs where you can immerse yourself in the thing you love the most.

What would you like, when you retire from research many years from now, to consider your ultimate legacy to be?
I do believe in the importance of new music and it would be lovely to think that my work had in some way encouraged new ways of thinking about or creating music. 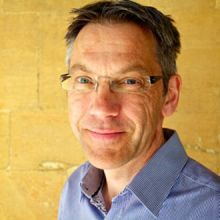 Professor Cross is Professor of Musicology at Christ Church.

Stravinsky, Britten and the Lure of the Classical Past lecture: