'Physics tells us that randomness is, in a very deep way, inherent in the very structure of the universe.'

What does randomness and order mean in quantum physics?
It's more than the usual sort of randomness we might encounter in everyday life, where you’re not sure what the stock market’s going to do or what the weather’s going to be like. Because, although those things are definite – in the sense that there will be stocks that have real prices to the buyer and seller – the whole edifice is so complicated that it’s impossible to know what those tiny details are at any one time.

But, in quantum mechanics, the notion of randomness is embedded very much in the theory itself: that it is intrinsically unknowable – not just that you don’t know it, but that it is not knowable itself.

But, in quantum mechanics, the notion of randomness is embedded very much in the theory itself: that it is intrinsically unknowable – not just that you don’t know it, but that it is not knowable itself.

There’s been a long debate as to whether this is simply that we have an inadequate theory and that at the bottom of it all there’s really stuff there that we can talk about definitely, or whether it really is that unknowable. People are still doing experiments, still thinking of ways to test that very concept, which is remarkable given how successful we’ve been in applying that theory to do all sorts of things. So it’s strange that this very successful theory somehow seems to be built on foundations that we don’t properly understand.

When you first came across the extent of randomness in the world’s structure, did it change your perspective?
Certainly it’s something that is very starkly evident as you begin to learn quantum mechanics as an undergraduate, and it does affect how you understand the very nature of what physics is about.

Then the question is: was our earlier picture just something we were comfortable with, not any more real?

Yet one does wonder whether in a sense it’s a modern disease – that is, the reason it feels so strange is that we’re used to the idea that science dissects things to the point where you reach irreducible elements that are real things (and then you can build up concepts and ideas on top of those). Quantum mechanics seems to shake that picture. Then the question is: was our earlier picture just something we were comfortable with, not any more real?

Nonetheless, there is a dichotomy between the concept that things are fuzzy at the foundations and yet in everyday life we find things apparently completely certain: this is a solid table; we know it’s there and we don’t seem to feel there’s an uncertainty about it at all. So the question as to how this certainty arises out of this picture of underlying fuzziness is of great interest to physicists.

There’s always a tendency in physics to tie the concepts that appear in your calculations to things that actually exist in the world. That’s not a uniquely quantum mechanical thing: Newton was challenged when he came up with his ideas about gravity, which required there to be a force – an action-at-a-distance – between planets, and people felt, because he couldn’t describe in physical terms what that connection was, that he was introducing ideas of 'the occult' into science. He had a very impressive tool to calculate orbits based on a concept that at the time people felt was just ridiculous – the objection that it didn’t have a correspondence in the universe is the same as what we find now. The idea that things in your equations must correspond to things in the real world is always a tension in physics, and quantum mechanics just raises that in a new and very profound way – a way that challenges our conception of what the scientific enterprise is about.

Do you think there’s something problematic about human desire to find order, when there’s a lot about the structure of the universe that is random?
This is outside my realm of expertise, but I think the enterprise of physics is about deeper understanding. Our understanding of the universe’s structure does give us a perspective of our place in the world. In the case of quantum mechanics, people have been working for hundreds of years to discover just what this structure is telling us. There are very creative ways to think about how randomness arises within our experience of quantum mechanics. One conception, for example is embodied in the Many Worlds model.

Outside of randomness, what is your general research interest?
My research has been how to prepare, manipulate and probe quantum states of light and matter. Working in atomic physics and optical physics is nice because you can work in ambient conditions, with a laboratory of relatively small scale. When you want to explore quantum phenomena in such conditions, you have a couple of choices: one is you can work on very fast timescales, because when you create a quantum state, it tends to dissipate into the environment very quickly (that’s why you don’t generally see these things at room temperature); the other way is to use light itself to explore the quantum structure of the world.

One of the big projects that we’re currently engaged in together with many colleagues across this university and several partner universities is to combine photons and atoms in order to try and build large-scale quantum states. That’s become feasible with some serious engineering, and it’s very exciting, for two reasons. First of all, when quantum states get big enough there’s no other way you can study them, other than to build them. Because it’s not possible to calculate using a normal computer what they are, what their structure is, what their dynamics are; they are too complicated. What that means, which Richard Feynman pointed out some 30 or so years ago, is that the information these states contain is vastly different from anything we know how to process.

He hinted that we could also use these states to build computers whose power vastly exceeds any conventional computer you could imagine building. So you open this door to new discovery, new science and new technologies that could be truly amazing: fully secure communications, really precise sensors, simulation of new materials and molecules, perhaps leading to new drugs. This dual road, where you can see a really fruitful area, a new frontier of science, and new applications is really exciting.

Has the potential for that sped up in the last decade, as technological improvement has?
Yes, I think particularly in the UK the government has identified the technological potential of quantum science and felt it was something the UK could take a lead on, based on the long history of innovation in this country in the underpinning science. They've invested a lot of money and that’s really enabled us to begin to tackle some of the serious engineering and technology questions that weren’t possible before. It’s a good time to be in the field.

Where in Oxford are you building these structures?
There’s a new building being built in the Physics Department, just on Keble Road, and part of the laboratory space will be for this new technology centre – that’s where this machine will be built.

You’re also Pro-Vice-Chancellor for research; what does that involve?
My role as Pro-Vice-Chancellor is really to have sight of the research activities, and help drive some of the research policies and the overarching research strategy for the institution. It’s also to do with the wider engagement agenda, especially around innovation: how do we ensure that, where it’s appropriate and possible, the fruits of our research are utilised for the benefit of society? That’s also a very exciting part of the work: seeing this ferment of ideas and being able to facilitate where some of them, at the right time, have possible applications is really fantastic.

Having worked at various different universities, is there anything you think is particularly distinctive about Oxford?
Well, I think it’s a place that respects the creative autonomy of individuals and works hard to make sure that people can pursue the ideas they want to pursue . And the structure, whereby you can get to talk to people of many different backgrounds and expertise, is, I think, something that is different from many places. I think the scale of excellence across the University institution is something that gives Oxford a distinctive flavour.

When you stop researching, what would you like to consider the ultimate legacy of your work to be?
On the science end, if we’re able to really show how you can build these quantum machines and use them for new machines and applications – it would be great to have contributed something substantive towards that. Moreover, to have enabled the University to continue to excel and to realise its potential as a critical part of a modern society. 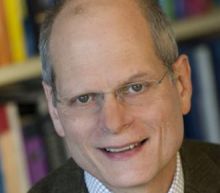 Ian Walmsley is Hooke Professor of Experimental Physics, Director of the Networked Quantum Information Technologies Hub, a Professorial Fellow of St Hugh’s College and was appointed Pro-Vice-Chancellor for Research and Innovation in February 2009.

Animation looking at work by Ian's group on quantum mechanics

Other 'randomness and order' conversations: