Historian Dr Oliver Cox and colleagues from a broad range of disciplines are transforming the way the University of Oxford works with the heritage sector. 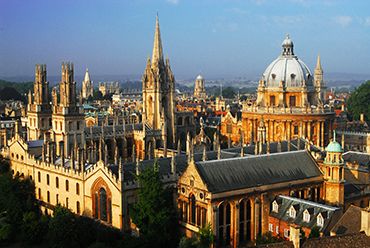 “It was just sitting on the shelf in the secure archive store,” says Cox. “The archivist suspected it might be a Shakespeare First Folio, but wasn’t sure. We were able to bring in Shakespeare expert Professor Emma Smith to verify the find, and it’s been hugely significant addition to the archive.”

The discovery of the Folio in the Mount Stuart Collection on the Isle of Bute was the history media story of 2016. However, it is only one example of the impact of a programme of academic engagement with the UK and international heritage sector, which has been running since 2013.

Of particular significance is the University’s strategic partnership with the National Trust (NT), Europe’s largest conservation charity. This partnership, led by Alice Purkiss, facilitates cutting-edge academic research into NT’s inspiring places and collections, and embeds it into interpretation and public programming initiatives.

“Academic partnerships with the heritage industry are a win-win,” says Cox. “For partners, access to historical expertise strengthens their curation, enriches the engagement of staff and visitors, and boosts business – from footfall in the property to spend in the café. For us, it gives us new audiences and outlets for our research, and new routes to market. At Oxford we’re experts in creating authentic, accurate and accessible content, which is the foundation for rewarding and stimulating heritage visits.”

A new four-year project exploring the Jewish Country House, led by Professor Abigail Green, is an example of the scale and ambition of work. The project, which has just received over £800,000 from the Arts and Humanities Research Council, is working with partners in the UK, Italy, France, the Czech Republic and Sweden, to re-write nation-centred accounts of the country house and stress the importance of their pan-European connections. “It’s a way of further restoring and validating the history of the Jewish community in Europe,” says Cox. “The programme will identify a heritage trail of significant properties across Europe which will provide a focus for tourists and scholars exploring and celebrating Jewish history.”

Another strand of the heritage work is the development of internships and undergraduate and post-graduate training for researchers, providing a career pathway for researchers, and a pool of skilled and talented people for the industry.

Positioning Oxford as a significant player in the heritage sector has also encouraged a wide-range of academics to develop their own projects, with support from Cox’s team and the newly created Oxford University Heritage Network, led by Professor Heather Viles.

“The heritage programme gives us new audiences and outlets for our research, and makes sure we’re relevant and accessible outside the university walls,” says Cox. “That’s hugely important in an increasingly restricted funding context, where it can be harder to make the case for the humanities. It also helps us to bring a more diverse range of students and researchers into the university.”

The heritage programme is now looking to reach out to other universities and new partners. “We have a lot to learn from other scholars and from an extended range of partners,” finishes Cox. “It’s taken six years of work and investment to get to this point, but we now have a solid relationship of trust with the industry and a track record of useful intervention. We’re really excited to see where we can take the heritage programme next.”

“The National Trust and Oxford University have a strong history of collaboration. Our new strategic partnership creates even more opportunities for bringing cutting-edge academic research into the stories we tell about the places and collections in our care.”