The success of University of Oxford chemists in using electrochemical sensing to detect the spiciness of chillies has led to the recent development of new sensors for garlic, turmeric and ginger. 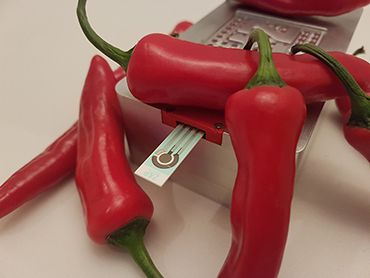 Chillies are widely used in the food industry, but individual chillies – even of the same variety – are not all of the same strength. This presents manufacturers with a problem: how can they ensure consistency of heat in foods that contain chilli?

For over 100 years, the standard method of assessing chilli strength has been the Scoville Test. A chilli sample is repeatedly diluted and given to a panel of five expert tasters until a majority of them can no longer detect the heat. The dilution level gives a number that describes the strength of the original chilli.

Not surprisingly, the accuracy of the Scoville Test is entirely dependent on how sensitive the tasters are to capsaicin, the molecule that gives chilli its heat. It is also time-consuming and costly to perform. It is possible to measure capsaicin content using more consistent scientific methods, but these require expensive lab-based equipment and trained staff.

What manufacturers needed was a simple, hand-held device that could be used to test chilli strength. This is precisely what Professor Richard Compton and his group at the University of Oxford have achieved with their ChilliPot sensor, produced in collaboration with Zimmer & Peacock (ZP), an electrochemical sensor manufacturing company.

The science underpinning the ChilliPot was born out of the Compton group’s expertise in electrochemistry. Molecules of capsaicin stick to a sensor covered in carbon nanotubes. The more that stick, the stronger the signal, and the hotter the chilli. The ChilliPot can give an accurate chilli strength reading in less than a minute – altogether quicker, cheaper and more accessible than the Scoville Test.

The success of the ChilliPot triggered further food industry challenges: could similar sensors measure levels of turmeric, ginger or garlic? Like chilli, ginger and garlic are used in huge quantities but batches can vary significantly in terms of flavour strength. Turmeric is expensive, and so may be adulterated with other compounds (including poisonous lead chromate), which makes standardisation particularly important.

It turns out that the active ingredients in turmeric and ginger (curcumin and gingerol respectively) can be detected using carbon nanotube electrodes in a similar way to capsaicin in chillies. The garlic sensor uses a different but equally effective electrochemical method. Sensors for all three foods are now licensed to ZP in a successful commercial partnership.

Professor Compton and his colleagues now plan to use this technology to solve further challenges, such as the electrochemical detection of bacteria like E. coli. The group has also patented techniques for saliva-based cannabis detection and environmental nanoparticle detection.

‘It’s great to be able to take the latest developments from the Compton lab and then use our skills to develop and market them to the customers. Our products must be easy to use and these electrochemical sensors lend themselves well to compact electronics integrated through to simple smartphone apps.’