The creation of the Global Jet Watch observatories has led to real impact on communities spanning four continents, which work together to track Galactic black holes and exploding stars in the night sky. 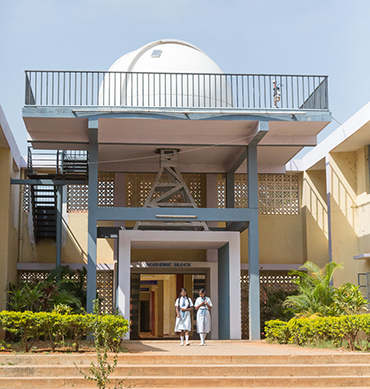 A key aim in astrophysics is to understand how matter behaves in the vicinity of black holes and supernovae in galaxies across the Universe, especially in our own Milky Way. Measurements taken only days or even hours apart can show huge changes, for example ejecting massive jets of matter or tearing apart neighbouring stars. Continuity of monitoring helps scientists understand more about how these highly dynamic systems work.

Watching rapidly evolving objects from Earth, however, poses a problem. Optical telescopes can only make observations during the hours of darkness. To get around this limitation, Professor Katherine Blundell won a prize and a grant from the Royal Society and secured funding from a range of charities and individuals to establish a network of five observatories across the world: one in South Africa, one in Chile, one each side of Australia, and one in India. As night-time ends in one location, observations are continued by the next observatory round in longitude.

This project is unique, and its spin-offs are unique too. One of the goals in establishing these observatories was to benefit local schoolchildren in the developing world particularly in cultures that do not traditionally think of girls as scientists or engineers. As a result, four of the five observatories were located in residential schools, who use the telescopes with their students to inspire an interest in science, maths and engineering. After the students go to bed, the telescopes are operated by remote control via the Department of Physics at the University of Oxford, collecting astrophysical time-series data.

The Indian observatory is based at a school where students are from very poor communities from diverse castes and would not otherwise have had any opportunity to study science of this kind; over half of these schoolchildren are first-generation literates. A particular challenge at this school observatory was the extremely unreliable local electricity supply, which wrecked sensitive equipment necessary for the astrophysics research. By raising funds from donations, Professor Blundell was able to work with the school to install a solar farm on their roof. The school is impressed that electricity can be collected from the sky and to give reliable infrastructure and communications. The first schoolchildren involved in the project have chosen to go onto college to study subjects such as physics and engineering.

Global Jet Watch is delivering the goal of involving children, especially girls, in science to enhance their education whilst broadening their horizons and raising their ambitions.

'This project is unique and important in providing not just the facilities for cutting-edge science, but also in engaging the enthusiasm and enhancing the education of the children'

Lord May of Oxford, OM, AS, FRS