A social enterprise, set up by Oxford University graduate students, is bringing uncomfortable aspects of Oxford’s history and society to public audiences in the city.

Uncomfortable Oxford started by organising public walking tours which introduced people to hidden and uncomfortable aspects of the city’s past and present. Based on rigorous academic research, the tours looked behind the obvious facades and landmarks to explore the networks of power, privilege and wealth that have formed Oxford over centuries – and influence it today.

“Oxford usually attracts around nine million visitors a year,” says Paula Larsson, co-director of Uncomfortable Oxford. “But it’s hard for them to access the university’s research, really understand the history of the place, or even meet a student! We wanted to do something which would open up the university and the city to everyone.”

The original tour reflects on the politics of ‘Memory and Memorialisation’ and explores aspects of the city such as: statues (who they are, where they are positioned, who put them there?); street names (who is represented, who is missing?); and buildings (where did the money come from, who used them, who was excluded?).

Other tours include: Oxford and Empire; Follow the Money; Uncomfortable Literature; Uncomfortable Ashmolean; and Hidden Histories. The literature tour explores how works of fiction highlight Oxford's uncomfortable relationship with power, wealth, and traditions of class gate-keeping, such as in Hardy's Jude the Obscure; the Ashmolean tour looks at the ethics of how and why the collections came to Oxford and the politics of how they are displayed.

The mission of Uncomfortable Oxford is to challenge and shift attitudes – thus creating lasting change. “We try to encourage open discussion and conversation,” says executive secretary Waqas Mirza. “Participants are usually eager to learn and open to reevaluating their own views. When there are disagreements, guides are trained to question inflammatory statements and emotional responses, and to steer people towards respectful disagreement.”

The COVID-19 pandemic has presented both challenges and opportunities for the enterprise. Whilst walking tours have been put on hold, on-line activities have expanded and Uncomfortable Oxford have developed a history podcast, virtual walking tour, and new online events. 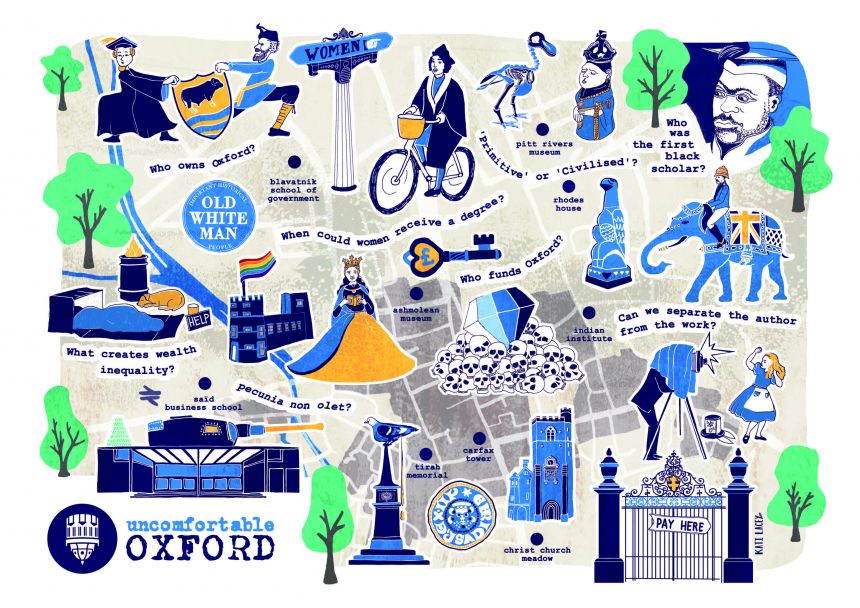 The surge of interest in Black Lives Matters has also increased interest in the issues they deal with. “People have a real appetite to understand the role of the UK in building and perpetuating empire, slavery, and inequality. The academic research we’re doing in Oxford throws light on all of these issues and we are keen to share it with others,” says Paula.

Uncomfortable Oxford’s activities have attracted an enthusiastic and growing following. In 2019, the enterprise welcomed more than 3,000 people to their tours and events. In 2020, they reached even greater audiences with nearly 8,000 people from over 80 countries attending events or downloading the podcast. Bespoke events have also been delivered for organisations such as the Wellcome Centre for Ethics and Humanities, The Weston Library, and the SKOLL World Forum, and collaborations have been established with both local schools and community organisations. The enterprise receives frequent requests to extend its activities in Oxford, and expand them to other academic institutions, cities, and even countries.

Waqas reflects, “All of us at Uncomfortable Oxford have got so much from being involved. For me, it’s deepened my approach to making teaching accessible and interesting for students and encouraged me to re-explore my own family history. We are all committed to developing and expanding our activities – opening up these difficult but compelling issues to an even wider range of people.”

Paula Larsson is co-founder and director of Uncomfortable Oxford, Doctoral Researcher at the Centre for the History of Science, Medicine, and Technology, and a member of New College, Oxford.

Olivia Durand is co-founder and director of Uncomfortable Oxford, Doctoral Researcher at the Centre for Global and Imperial History at the Rothermere American Institute, a Librarian at the Vere Harmsworth Library, and a Senior Scholar at Pembroke College, Oxford.

Waqas Mirza is executive secretary of Uncomfortable Oxford, Doctoral Researcher at the Department of Medieval and Modern Languages, a Junior Teaching Fellow for the Ashmolean Museum’s Krasis Program, and a Teaching Assistant & Senior Scholar at Lincoln College, Oxford.

Uncomfortable Oxford is an independent organisation and not part of Oxford University.

For more on Uncomfortable Oxford, including booking tours and events, accessing free learning resources, and to discuss potential collaborations, visit their website

‘If this tour doesn’t get you thinking, nothing will. A brilliant 90 minutes.’