The Council’s goal is to foster a positive, stimulating and inspiring academic community which serves as a launch pad for the future.

To find out more about the 2021 Council please see their bios. We hope to soon be able to link to the 2022 Council's bios on the Scholars' Association website. 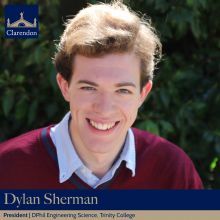 Dylan is currently in his first year of a DPhil in Engineering Science at Trinity College. Dylan was selected as a 2020 Australian John Monash Scholar and holds a Bachelor of Science (Advanced) (Honours) with the University Medal and Bachelor of Laws (Honours) from the University of Sydney. Dylan’s research builds on his previous experience as a molecular materials chemist, investigating tailorable nanoscale multifunctional hybrid materials known as Metal-Organic Frameworks (MOFs). Dylan is also a lawyer, having practiced as a corporate lawyer at Clayton Utz, and an experienced negotiator. Passionate about education, Dylan has been actively increasing access for regional centres to enrichment and STEM programs as a leader of the da Vinci Decathlon and with the National Indigenous Science Education Program. Dylan also specialises in teaching problem solving and creative thinking, having founded the workshop program Designing Minds, and as a multi-international champion Future Problem Solver. Alongside these pursuits, Dylan is a multi-national champion percussionist, enjoys playing piano and orienteers through seldom seen natural landscapes. Dylan is enthused about reinvigorating the Clarendon community in 2021 and looks forward to working with the 2021 Council to provide a huge range of fresh and unique opportunities for all as we navigate a new world.

The Vice-President is responsible for the discharge of the regulations, management of Council and the Clarendon Scholars’ Association administration as well as providing support to the President in achieving the Council’s goals. 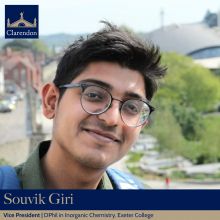 Souvik is 1st-year DPhil student in inorganic chemistry at Exeter College. He completed his Bachelors and Masters in India and was awarded a University Silver Medal. He is an aspiring experimental chemist with a focus on designing new inorganic materials for potential applications. Souvik is very excited to be part of the Council and to support the betterment of all Clarendon scholars. As Council Vice President he will handle the administrative work and along with the President, keep the Council running smoothly.

The Treasurer is responsible for managing the financial affairs for the Clarendon Scholars’ Association and the Council. 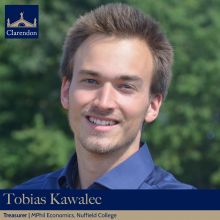 Tobi was born and raised in Germany (and a bit in Poland) and is currently enrolled in the MPhil in Economics, living in at his college, Nuffield. For the 2021 Clarendon Scholars' Council Tobi has been appointed Treasurer, so will oversee and allocate the budget available to the different Secretaries together with the President and Vice-President of the Council, while simultaneously helping with the realization of our projects and events. Previously, Tobi served as the President of the Student Council of the Faculty of Economics at Goethe-University Frankfurt for two years. He aims to combine the knowledge he accumulated over those years with the expertise of the other Council members and scholars to contribute to the well-being of the Scholars' Council!

The Secretaries are each responsible for different social and academic aspects for the Council. The key goal is to drive a connection between members of the Clarendon Scholars’ Association. 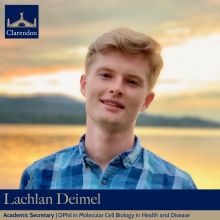 Lachlan is a first-year vaccinology DPhil student at the Sir William Dunn School of Pathology. In particular, he aims to establish a novel vaccination platform to provide robust antibody responses against the human immunodeficiency virus (HIV). Lachlan completed his undergraduate studies in biomedicine at the Australian National University as a Tuckwell Scholar before becoming a pre-doctoral fellow at the California Institute of Technology. As Academic Secretary for the Clarendon Scholars’ Association, Lachlan will run diverse educational and social events for scholars.

The Alumni and Careers Secretary 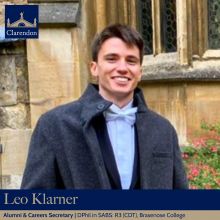 Leo is pursuing a DPhil in computational and data-driven approaches to drug discovery at the SABS:R3 Centre for Doctoral Training. Originally from Germany, he grew up in Russia and earned his undergraduate degree in Switzerland, which is why his hobbies include hiking, climbing, and skiing. As Alumni and Careers Secretary, Leo looks forward to connecting current and former scholars and helping them shape their career paths after their degree. 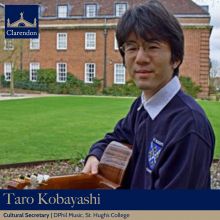 Taro Kobayashi, Cultural Secretary, is currently pursuing a DPhil in Music (with a focus on early modern devotional music in Italy) at St. Hugh’s College, having previously also obtained an MSt in Musicology there. Originally from Japan, he has lived in Hawaii and completed double Bachelors degrees in Physics (comprehensive track) and Music (guitar performance) from University of Washington, Seattle. Before beginning his research in music at Oxford, he worked as a physicist working on developing sensors and methods for natural disaster warning and seafloor geodesy. 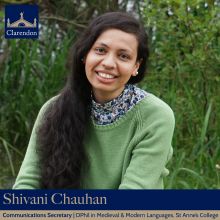 Shivani is pursuing a DPhil in German literature at the Faculty of Medieval and Modern Languages. Before coming to Oxford, she studied German language and literature at Jawaharlal Nehru University (New Delhi, India) and in Germany also attended the University of Education, Weingarten, the University of Wuppertal, and the University of Freiburg as a guest scholar. Her role as Communications Secretary on the Council allows her to function as a bridge between the Council and the scholars’ community. Since she has always been interested in the creative reworking of her experiences in written and photographic media, Shivani finds the part of the role that involves acting as an editor for the Chronicle is immensely exhilarating. 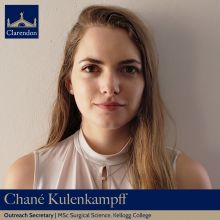 Chane is a South African medical doctor currently completing her part-time Masters in Surgical Science and Practice at Oxford while working for the NHS. She is a Kellogg College student. And, she is very proud to be the Clarendon Council’s Outreach Secretary for 2021. Chane is passionate about outreach and hopes to help her fellow Council members make a big difference this year! 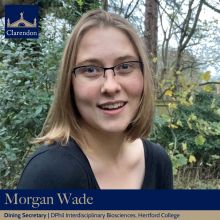 Morgan is the Dining Secretary of the 2021 Council. She is a second-year DPhil student at Hertford College, originally from Colorado in the United States, studying plant immunology and agricultural biotechnology. Aside from her obsession with food and organizing fun dining events for the Clarendon scholars, Morgan loves a good hike, a good book, and is always up for an adventure. 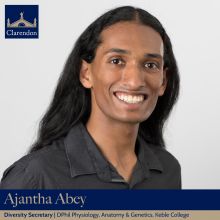 Ajantha is from Sydney, Australia, and is currently living in Keble College. He is a first year DPhil at the Department of Physiology, Anatomy and Genetics studying Alzheimer’s and Parkinson’s diseases using stem cell models and always more than happy to talk about all things neuroscience! He completed a Bachelor of Advanced Science and Arts at the University of Sydney, majoring in Neuroscience, Latin and Ancient History, with Honours in Anatomy and Histology, studying canine dementia and regenerative medicine. As well as several years as a Research Assistant and in academic teaching, he has been involved in the sport of quidditch for a long time as a player, photographer, coach, club president and Board Director for Quidditch Australia. As Diversity Secretary, Ajantha hopes to make full use of how incredibly international Clarendon is and make sure everyone has the opportunity to meet people from and learn more about other disciplines, countries, cultures, genders, ethnicities, backgrounds, and more!

The Editor of the Clarendon Chronicle 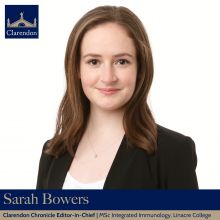 Sarah is an MSc candidate in Integrated Immunology and a member of Linacre College. She has a particular interest in inflammation and rheumatic disease and holds a BSc in Biochemistry from the University of British Columbia, where she graduated with honours as a Wesbrook Scholar. Originally from the West Coast of Canada, Sarah enjoys the outdoors, ballet, and sharing her passion for science through outreach. Sarah is honoured to be elected Editor-in-Chief of the Clarendon Chronicle. In her role, she hopes to work closely with fellow scholars to highlight the diverse and interdisciplinary nature of the Clarendon Community. 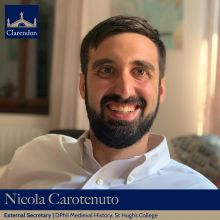 Nicola is a first year DPhil student in Medieval History. He has previously studied at the University of Pisa and at Scuola Normale Superiore, and has been an exchange student at École Normale Supérieure. He is Italian and is currently the Clarendon Council’s External Secretary, which means that he will foster cooperation between Clarendon scholars and recipients of other scholarship schemes at both Oxford and Cambridge. Nicola is the TedX representative of his college (St Hugh's) and the vice representative of his course. He loves rowing, rugby, classical music, reading, collecting coins and stamps, and traveling. 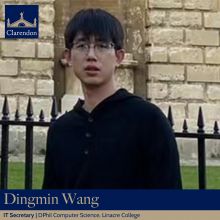 Dingman is from Fujian, China, and completed his master’s studies at Tsinghua University. Here in Oxford, he is a first year DPhil student in the Department of Computer Science. Dingmin is really into different kinds of sports activities – he’s been practicing badminton and swimming for the longest. He looks forward to serving as this year’s IT Secretary. 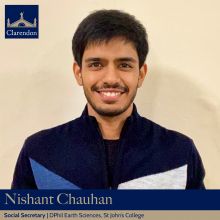 Nick is a first-year Earth Sciences DPhil at St. John’s College from India. He is studying the fundamental processes involved with calcification in the phytoplankton group called Coccolithophores. As one of our Social Secretaries, he is responsible for making your time at Oxford even more wonderful than it already is! He will be organising virtual and in-person meetups, pub crawls, and various other fun social events. If you have any suggestions, questions, or if you just want to make a new friend, please get in touch! 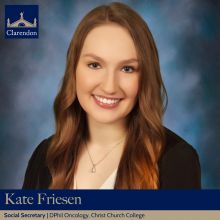 Kate Friesen is pursuing a DPhil in Oncology working on oncolytic virotherapy at Christ Church. She is originally from Winnipeg, Manitoba, Canada (fun fact: it can get colder than Mars there!). In 2020, Kate graduated from the University of Toronto with an Honours Bachelor of Science degree majoring in Immunology and minoring in Physiology and Biology. Kate has also undertaken two research internships at the Hudson Institute of Medical Research in Melbourne, Australia. She is very excited to be one of the Clarendon Council’s Social Secretaries this year, and looks forward to meeting everyone!