Clarendon advances the University’s objective and passion for furthering excellence in research, scholarship, and education at Oxford.

The Clarendon Fund derives its name from its close relationship with Oxford University Press (OUP) and in honour of an act of philanthropy by the Earl of Clarendon. 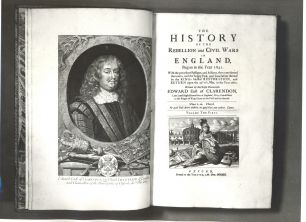 Reprinted by permission of the Secretary to the Delegates of OUP

During the 17th century, Edward Hyde, later the Earl of Clarendon and also the Chancellor for the University of Oxford from 1660-1667, presented his hugely successful work on the English Civil War entitled The History of the Great Rebellion and Civil Wars in England. In recognition of the Earl’s affection for the University, the royalties from his publication were bequeathed to the University for the construction of the Clarendon Building on Broad Street. A prominent sight within Oxford, the Clarendon Building initially housed OUP until its relocation in the 1820s. The building was originally constructed in the neoclassical style, from 1711-15, on the designs of Nicolas Hawksmoor, a pupil of Sir Christopher Wren. In recognition, the Earl of Clarendon was also commemorated in statue on the building, by the leading English sculptor of his time, Francis Bird.

Redesigned in 2014, the Clarendon Fund logo draws on the history and traditions of Oxford and OUP. The emblem depicts the prominent pediments and statues of the Muses from the rooftop of the Clarendon Building. Historic links are also represented in the Clarendon font, which is one of the Fell typefaces procured by Doctor John Fell in around 1670-72 and subsequently bequeathed to OUP.

In memory of this generous gift, the Fund embodies the Earl’s aim to promote education and learning at Oxford.

Oxford University Press (OUP) is a department of the University of Oxford. Surplus income from OUP is transferred back to the University which provides the primary support of £9.2m per year to the Clarendon Fund.

At OUP, our mission is to further the University’s objective of excellence in research, scholarship, and education by publishing worldwide. This, along with our commitment to enriching lives through education, underpins everything we do. We are proud to have supported the Clarendon Scholarship programme from its inception. To date, we have donated more than £94 million, and enabled more than 2,500 people from across the world to study at the University. I look forward to continuing our involvement in the programme, and supporting many more students in achieving their academic aspirations.

As the largest university press in the world, OUP can trace its rich history back to 1478, just two years after William Caxton established the first printing press in England. Since that time, OUP has continued to promote the dissemination of knowledge and education across the world. Through their broad range of published content, OUP spreads knowledge, enhances understanding and inspires a love of learning across the globe. Clarendon is just one aspect of the continuing activities of the Press. Many Clarendon scholars are connected to OUP even before they arrive in Oxford. From children’s fiction to the renowned Oxford English Dictionary, widely regarded as the most comprehensive record in the world, OUP reaches a world-wide audience.

Thanks to their generous gift to the Fund, OUP has enabled Clarendon scholars the freedom to pursue their academic and educational interests, a act of enduring value to the University.

Alongside OUP, Clarendon receives a lot of support from the many of Oxford’s colleges, academic divisions and departments, University trust funds, and external partners. Known as Partnership Awards, this collaboration allows the costs to be spread between multiple sources enabling additional fully-funded scholarships to be awarded, and providing over £8.9m per year to the Fund.