Learn what Clarendon means to our scholars.

For insight into some of our scholars including their work, hobbies and involvement in the Clarendon community, see their stories below.

I am a paediatrician and currently researching an investigation into the impact of congenital anomalies in infant death rates. The Clarendon-Green Templeton College-Nuffield Department of Population Health Scholarship has really allowed me to conduct high quality research and integrate evidence into my clinical practice. I trust the experience will better prepare me as a physician to apply my skills and knowledge to care for sick children to the best of my capability. 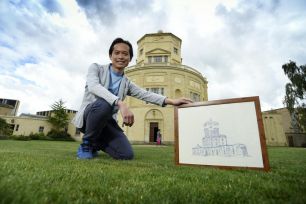 I am an active member of the Oxford Union Society and like to attend debates and talks by renowned speakers in the field. I recently won best speaker in Global Health debate competition in Merton College on the topic 'Should we put a cap on life-saving drugs?'

I love painting in my leisure time. This year, I have submitted four pieces of art works ranging from cartoon, expressions, to Oxford College drawings which received good feedback from the Ashmolean Museum senior curator during Green Templeton College Art exhibition in June. The exhibition was reported in the Oxford Times and Oxford Mail newspapers.

The Clarendon Scholars’ community provides me with a unique environment to interact and collaborate research with other scholars in the field. For example, I have invited and collaborated with another Clarendon scholar to help with a systematic review as an independent reviewer for our publication.

With a diverse range of activities throughout the year organised by the Clarendon Scholars’ Council, I have many opportunities to engage in social and networking events such as the Clarendon Annual Reception, College formals, Clarendon lectures etc. to balance my academic life. Through the Clarendon Chronicle, I have published articles sharing my interests and other activities.

I feel privileged to be part of the Clarendon Scholars community while studying in Oxford!

A highlight of this year for me, both academically and personally, was a research trip I made to eastern Bolivia, during which I recorded many hours of informal conversation with native speakers of little-studied rural varieties of Spanish and of the (also little-studied) indigenous minority language Chiquitano, which is spoken only in Bolivia and in a tiny bordering area of Brazil, and by rapidly decreasing numbers of people.

The information I've garnered from these recordings, as well as from observations made while in the field, has corrected some misapprehensions I previously harboured regarding the kinds of influence Chiquitano has had on the varieties of Spanish with which it's been in contact for centuries. It's also introduced me to linguistic phenomena I hadn't expected to encounter in this or any other scenario. What I've learned from my fieldwork so far has redirected my thesis research in certain respects and, as a result, greatly informed the shape the overall project has wound up taking. 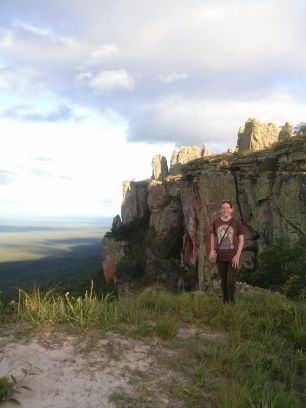 I joined the Philological Society at the start of this year, which has opened the door for me to attend events broadly related to my discipline I likely wouldn't have attended otherwise. The issues discussed at such events are rarely directly linked to my research, so this has been an interesting opportunity to learn about areas of linguistic investigation I'm not much familiar with. I've also continued to participate in a local church choir this year. It's been a great pleasure immersing myself in a musical tradition I had almost no knowledge of before arriving in England and contributing to aspects of Oxford community life that lie outside the bounds of the University by singing at parish events, holiday concerts, etc. I've also begun attending meetings of a local Rotary club with an aim toward pitching in on local philanthropic/charitable efforts not strictly associated with the University, and have joined the Oxford LGBT+ Bookclub, an experience I've very much enjoyed so far. Oxford is the first place I've lived where I've felt free to talk about matters pertaining to my sexual orientation without expecting a strong backlash from society in general, and the first place I've felt like I could be part of a community of people who can relate in this regard.

Without this scholarship, I would not have been able to continue dedicating my time to research, much less work toward a DPhil degree at Oxford as an international student. I'm very grateful for the opportunity the Clarendon Fund has given me to continue to explore and contribute to a field of learning that I love while surrounded by other people who are passionate about the same subjects.

For my PhD project, I now look into the application of microbubbles in immunotherapy using quantitative advanced fluorescence microscopy and ultrasound. 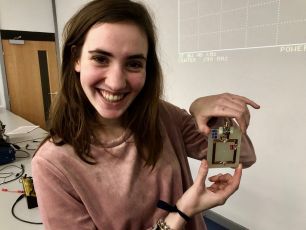 In 2017, I started a 4-year PhD Programme in Biomedical Imaging with the Doctoral Training Centre. The first 7 months, I partook in various one- and two-week modules that are designed to get everyone in the programme up to speed, since we all come from different academic backgrounds. These modules covered topics ranging from programming in various languages, image analysis, microscopy and medical imaging to statistics. The rest of the first year consisted of carrying out two short research projects. My first project was on examining the response of bacteria to stress using a combination of single-molecule fluorescence and single-particle tracking, which is important in tackling the world-wide problem of antibiotic resistance of bacteria. My second project was on opening the blood-brain barrier using microbubbles and ultrasound, to tackle the problem of administering drugs to the brain, for example in case of brain tumours.

Next to my degree, I have been an active member in New College's Middle Common Room (MCR) and I am the current Welfare Officer on the MCR committee. I have taken up both rowing and coxing for the college's boat club, and am a member of the boat club’s committee. Furthermore, I am my college's representative for United Nations Women at Oxford and a member of the Oxford Union, the debating society, as well as, of course, part of the active Clarendon community.

I am incredibly grateful for having been granted the Clarendon scholarship. I am the happiest I have been in a long time, because I feel like I fit in in the social as well as academic environment at Oxford. Coming to Oxford for my PhD has been a life-changing experience: I’ve formed some of the best friendships, explored new sports and learnt a lot about myself. I absolutely love being able to study and do research in such an inspiring and motivating environment. I have met and worked with incredible people with similar ambitions and broad interests, whether it is people in college, my course, the scholarship community or my lab. Without the Clarendon scholarship, I would not have been able to accept my offer and come to Oxford to pursue this 4-year PhD programme. I hope one day to be in a position to give other students like me the opportunity to learn and excel in their field of interest!

I am a student of Oxford's International Human Rights Law Master of Studies programme, which encompasses a progressive model of continuing education. 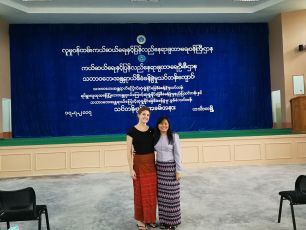 The Clarendon Scholarship has allowed me to pursue the highest quality human rights legal studies possible while applying my studies in real work situations. I began my studies as a staff member of the American Red Cross Myanmar Country Office, which helps build the capacity of the Myanmar Red Cross Society. I worked on Red Cross programmes focused on disaster risk reduction and disaster management, along with providing technical assistance on organizational development.

I have now changed jobs to gain additional experience, managing the Norwegian Refugee Council's Information, Counselling and Legal Assistance program in Rakhine State.  This program brings civil documentation, housing, land and property, along with dispute resolution knowledge and skills to villages and IDP camps within Rakhine. Both jobs during my time as a student at Oxford have allowed me to apply technical knowledge of the human rights legal framework to work on the ground.

I am extremely thankful for the opportunity Clarendon has provided, along with the community of scholars it is creating. I am proud to be a member of this community and use my experience gained to contribute to the current Myanmar community in which I live. I am already looking forward to future rights work, with optimism and possibilities unfettered by debt or hefty financial barriers. I would like to express my sincerest thanks to the Clarendon Fund.

This year I took my artistic practice and turned it on its head. When I began this year, I was wrapping up six years of practice based research into the impact of Germany’s 1937 Degenerate Art exhibition. My sculptures involved questions of nothingness and immateriality, both historically and aesthetically. I entered the MFA with the intention of seeing how this research would conclude. As it turned out, my research into nothingness had, indeed, led me back to making objects. 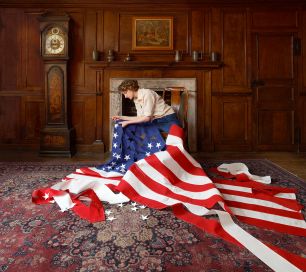 After the 2016 US Presidential election, the impending inauguration pushed me to place my garment making, my object making, within the context of women and power, women and community, women and history. I started to create a history that I wanted to be part of and conceived of my final exhibition.

The final exhibition included a number of elements, together entitled Model Maker Muse. In one element, a multi-part project, I stitch ripped an official American flag apart in order to re-sew it in pink thread. I performed the re-sewing and invited the audience to help. I then took the flag to Sulgrave Manor, the ancestral home of George Washington, and photographed myself unstitching and re-stitching the flag. The flag now sits as an honoured object in the type of memorial box given to the bereaved after a funeral.

The Clarendon events were some of the highlights of my year as the Clarendon community became my closest friends in Oxford. Receiving this scholarship has been one of the greatest gifts of my lifetime thus far. To be paid to pursue practice-based research in Fine Art is extremely rare and I feel incredibly honoured to have received such a gift. This scholarship changed everything for me and is primary the reason that I accepted my offer at Oxford. It was a vote of confidence in my abilities and granted me the opportunity to make art uninterrupted. Thank you.

As a result, I am extremely pleased to report that I received a Distinction as my final mark.