Caitlin works with Dr Tom Hart to collect and analyse vast numbers of photos of penguins in the Southern Ocean. By setting up a series of cameras around the penguins' habitat, they have collected unprecedented amounts of information on the penguins’ behaviour during the breeding season. I want to find out more about what it's like to live ‘on location’ and about the project and its findings as well as Caitlin’s experiences as a young, female DPhil student at Oxford.

Where are you in the world? What are you doing?
'I’m in Germany right now, in and out of here and Oxford. But it’s a good question: my work has taken me to the Antarctic twice – I spent a fortnight out there in January 2014 and then did a much longer stint there from October to December 2014.'

Where do you live in the Antarctic?
'Each expedition is different– last season we were based on the Falkland Islands. We lived on a small yacht, which is definitely a different lifestyle: 16 people on one small yacht is a lot of fun. Getting there is always a bit of an adventure too: it's about four to five days of nothing but sea, which feels much longer if you get seasick!
My supervisor has managed to negotiate free berth on commercial cruise liners in exchange for us giving lectures on board. It’s a great arrangement – it gives us far more flexibility to pursue research at a broader range of sites.'

How did you come to study here at Oxford?
'I’m originally from the States: Washington, DC. How I came here? Honestly, I was truly interested in the project. I knew about Dr Hart’s work and was really interested in working with him in particular. I knew he had set up a network of cameras in Antarctica and that he wanted a student to help him pursue the project: mine the data in the form of images that are produced by the cameras and expand the scope of the project even further. The prestige of Oxford definitely helped in my decision-making, but it was the project that really seized my imagination. I knew the project was really unique in scale and potential, certainly in terms of understanding more about penguin behaviour and – from that – effective conservation.'

Could you tell me more about the project?
'We have a network of over 60 cameras, overlooking six species of penguins, and I study three species in particular: Chinstrap, Gentoo and Adélie penguins. This network of 60 cameras has grown over five years – the output of the data that comes from amalgamating all of the camera images is massive.

'The second part of the project was the result of working to deal with the massive amount of data we had to sift through: hundreds of thousands of unsorted images. To achieve this, we teamed up with Zooniverse – a team of website developers and researchers who connect scientists with citizen scientists via an internet-based platform, and which is also headquartered at Oxford. They are really good at creating interfaces to allow internet users to help with data annotations on research science projects, typically by asking them to tag datasets like ours. This allows us to mobilise crowd-sourced metadata to make sense of the data we’ve collected much faster than if we were relying on our small team alone.

'Zooniverse helped build us a website, Penguin Watch. With their help, Penguin Watch users have classified more than a million images with roughly 14,000 people participating. That’s a phenomenal amount of data classification for us to use.'

How does it work?
'Each image is annotated by several users – to ensure the data is accurate – then the results are combined so that each penguin individual is represented by one x, y coordinate. We can then validate that x, y coordinate by comparing a portion of the images with my own annotations as a gold standard.'

In terms of the Penguin Watch project and citizen scientists, did you have much of a background in social media or communications? Were you surprised by the uptake?
'I didn’t really have any expertise in that area, and I wouldn’t consider myself an expert now. The one thing I would say is that having a direct involvement in the project is key. Penguin Watch users have really appreciated when I’ve been able to respond to them online about the project or one of the images they’re classifying in a forum we have created for the project. Also, having a really good relationship with Zooniverse – getting their team as passionate about the project as we are – has helped to build a website we are really proud of. Tom and I are truly enthusiastic about it and it comes from a very genuine place, which I think the team at Zooniverse saw quickly. So they were willing to take the extra mile on the project design because of it.

'Also, we were pretty lucky that people online seem to love penguins.'

What are some of the findings you’ve come up with from the penguin project?
'We haven’t analysed all the data yet, but there are many things we are hoping to achieve. One main focus is the timing of the different phases of the breeding cycle: the day the adults return to the site after winter, the day they lay their first egg, their second egg, and when they leave the breeding site. It’s all very basic biology – but we know so little because of the logistical difficulties of polar research. Longer term, we also want to gain a much better understanding of what the penguins do during winter: it is more than half their life but we know almost nothing about it (there are less than five papers on Adélie penguins, for example).

'Filling in these gaps can tell us a lot about where they’re overlapping with different fisheries, year-round. By looking at what penguins do in both the summer and winter at many sites over many years, we can better understand how their behaviour changes in response to environmental changes, like climate change.'

What would you like the ultimate output of your work on this project to be?
'It would be really nice to understand the strengths and weaknesses of using the camera system we have in place: not just for seabirds, but for colonial animals more broadly. It would also be interesting to know how accurate the citizen science component of this project is and whether it can also be expanded to include other seabird species.'

'When it’s hailing and you’re tired and hungry and can't feel your hands, trying to change 12 AA batteries and programme the camera while keeping it dry… that’s probably the worst.

'And the best? At the end of the day, after eight hours of tramping around covered in mud, when you can sit and relax and soak it all in. On the smaller yachts you have a lot of time when you don’t see anyone else. You’re alone in great, true wilderness and it reminds you exactly why you chose to study ecology.' 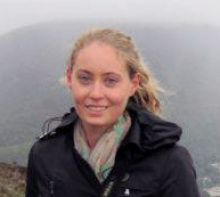 Caitlin Black is an MRes student in the Ocean Research and Conservation Group, part of the Department of Zoology at the University of Oxford. She is also a fellow of Lincoln College.

You can listen to an interview with project lead Tom Hart about www.penguinwatch.org here.

OTHER 'MAKING SENSE OF THE NUMBERS' CONVERSATIONS: