'I would make a distinction between conventions (like tying a tie) and rituals. Rituals are religious but not necessarily in an overtly Christian or traditional way. You might get people who obsessively wash their hands, and underneath that is a fear of pollution, it’s about purification. These "quasi-rituals" tap into the same things as traditional rituals (we see the same thing addressed in baptism, for example). At the point at which they're doing it: obsessively, compulsively, it can be understood as a ritual – different from a convention. Conventions are not intuitive but learnt; they are not an individual's response to a human sense of hope or fear.'

Professor Graham Ward, Regius Professor of Divinity at Christ Church, is speaking. He's responding to a question, posited in the previous interview with Harvey Whitehouse, about how day-to-day 'rituals' relate to religious rituals, and what role religious rituals fulfil in human psychology. This leads onto a broader discussion on the nature of faith and why humans believe. But, for now, the professor describes a family ritual and the human drivers it taps into:

'I grew up in Manchester quite close to the docks. There was huge pollution and fog then. On New Year’s Eve my grandmother would throw a big party to welcome in the New Year. That meant that the oldest person had to go to the front door and the youngest person had to go to the back door. On midnight the hooters of the ships in the docks would sound, then the front door and back door had to be opened simultaneously, and, for the length of the hooting, the doors had to remain open.

It was about belonging and generational change, and it was about how the family negotiated death and birth.

'If you’d asked my grandmother what it was all about, she would have said it was just good luck. But in fact it was all about purification: getting rid of the old, bringing in the new. It was about generational bonding, because the person at the front might not be there next year. It was about belonging and generational change, and it was about how the family negotiated death and birth. It was a practice that was put together. It had quite a distinctive shape and an occasion on which it was done. In many ways it might be seen as superstitious, but it had many different things built into it. It was getting at some deep things about being human, about being social animals, about understanding birth, death, pollution, bad luck, good luck.

'It all comes down to wanting to explain where we came from, where we’re going and why we’re here. The same deep-rooted questions that I think all faith, all religion, addresses. In this case, why are we here? We’re here for each other, we’re here generationally, we are subject to forces we don't know – chance, circumstance – so let’s get rid of anything polluting us and usher in the New Year, which is all purity and fresh air. There is a relationship with this ritual and the prehistoric, just one in a more elaborate consciousness, the same questions are being dealt with albeit in a more implicit way.'

I think it’s a compelling argument that religion fulfils a question of why we are here, but I'm interested to hear, if that’s the case, why many atheists or agnostics can carry on perfectly happily without religion, not apparently lacking anything?
'When I look at some of the writings of the new atheists, there are some of them who get involved in meditation, well-being exercises and various rituals of silence; trying to let things settle within themselves. These people do have a world view. It’s not that the world is meaningless to them and they do have sets of values. Their values are "Here is life – live it to the full." Some say "Get rid of the superego telling you to do this, this and this – you are in charge of your own life – live it to the full." They are creating world views, where the values and meaning come from the system itself.

'They have a story, the same as a number of religious people, about where we come from. A chance meteorite that struck the earth and created the amino acids and proteins that evolved into life, and we are it. We will go back to being simply DNA at the end of the day; chains of proteins will continue and find new ways of constituting life-forms. It’s not that they don’t have a story or meaning, and likewise it’s not the case that religious people can’t buy into big bangs and even multiverses at the same time as hold to their faith.'

Can you expand on this and sell the case for religion? How does it give more meaning to the question of why we’re here?
'That’s a complex question. I remember I was sitting in a seminar in Manchester with some graduate students who happened to be from different faiths and some who didn't belong to any faith. The faith question came up: "Why do you believe at all?" This was directed at a Muslim, who thought about it for a long time and then said “It works.” The Muslim began to tell his story about the way it works: "I have been protected," and a Jewish person cited a psalm describing how he had been in this situation and in that situation, and "Throughout all those situations, I have found God has been faithful." The general consensus was that people didn't believe against all the odds, but that, as they practised, they understood its veracity, its truthfulness, more and more. The practice shaped them and their understanding of the world, their relations to other people in ways that they saw were good. It "worked". There was a common consensus that you were being sustained by something greater than you and that you were giving thanks for that. In terms of the ethos and the ethics which emerge from devotion, worship, piety – I find that at that level there’s a great deal that is common between faiths.'

After such a remarkable discussion of faith, tell me more about your general research interest.

The more we understand about Neanderthal hominids we see they were profoundly religious.

'My daily work is modern Christian doctrine, but my last book, Unbelievable: Why We Believe and Why We Don’t, is trying to get at the deeper question: going right back to the anthropological findings to do with when people first started to believe, what believing was all about. And – right from the beginning – the indications are they were still religious. The more we understand about Neanderthal hominids we see they were profoundly religious. I'm trying to find out in that book not just the intellectual roots but the bio-psychological roots of what I see as the 3 roots of being human: desiring, imagining and believing.

'And before the Neanderthals, we have the Homo heidelbergensis. We have to remember that these species have lived much, much longer than we have lived.'

In describing the case for religious sensitivity in this species of prehistoric man, the professor relates an example from his book (original text provided here in italics): "around half a million years ago a clan of these people lived in the valleys of northern Spain, close to today’s cathedral city of Burgos. To all intents and purposes they were recognizably human. They were intelligent, tall, and well built: they averaged 1.75 meters in stature, weighed around 95 kilos, had brains of comparable size to ours, lived in social groups, and were probably able to speak.” (Finlayson) Significantly, among these bones was found a carved hand-axe made from red quartzite, rock not found in that area and suggestive of travel and the exchange of goods. The burial and the hand-axe reveal earlier forms of complex, symbolic behaviour and levels of self-awareness.

The bodies were not placed in the pit in Atapuerca by natural occurrence and the quartzite hand-axe still remains. The value of such an axe to a group of hunters is incalculable. Its burial with these remains is an "offering", a "sacrifice", even a "gift"... it raises the question of [their believing in] the transcendent Other.

'Animals don’t have belief, animals don’t bury their dead, they don’t have ritual. In the case of the prehistoric grave in Spain, they had done something, had dedicated something beautiful to mark death. That axe head meant something, these dead people meant something. It wasn’t random; it was placed in a meaningful way to mark the death of these people. Whatever that means they believed in, it was meaningful.'

It's fascinating that the birth of religion is tied up with the idea that death is something that we recognise as different, and acknowledge.
'That’s right! I think both birth and death are two great big events where there is interruption of wonder or fear. Every newborn child is something like a miracle, it brings in something new, with all its hopes, all its life before it. Then for corpses, we feel horror – something has gone, irrevocably gone. You have to face that, going into the funeral parlour – we recognise you’ve got this person still living inside you with memories and feelings, and yet there is nothing there. Birth and death then become very important.

'Death needs recognition because life is precious. The question where did we come from, why are we here, where are we going – all those three questions are related to the miracle of life itself; not something to be taken for granted.'

Before we draw to a close, I'd like to know more about you as a person - how did you come to study theology?
'I read English and French at Cambridge – but I was always interested in what lay beyond the subject area. I found what drew me to theology was that you could do history, philosophy, languages – all different sides of it. I loved that multidimensionality, it opened me up to an interdisciplinary way of working and the complexity of any question.'

Finally, what gives you most job satisfaction and what would you like to consider, when you (many years from now) retire, your ultimate legacy to be?
'Most job satisfaction? From my students. I love teaching – seeing the new generation come, helping pass on skills. It’s not, for me, about the information I have, that will fossilise quite soon, but working with some really enquiring minds – it never ceases to amaze me.
In terms of a legacy, I've just finished the first of four volumes trying to sum up Christian theology. But what I’d really like to do is leave behind funding for graduate students, it’s the most important thing I can think of – if I was able to do that, it would then ensure generations of theologians to come.' 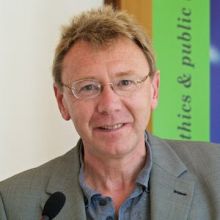 Graham Ward is Regius Professor of Divinity at Christ Church College, the University of Oxford.