Harnessing the time and skills of millions of volunteers worldwide is proving to be an extremely powerful way of driving research in fields as diverse as history, zoology, physics and even the response to humanitarian disasters. 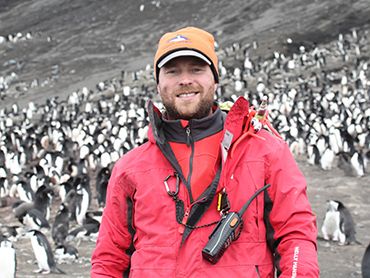 Tom Hart of Penguinwatch.
In 2007, astrophysics researchers at Oxford encountered a problem. They had access to millions of images of galaxies that could help them with their research into star formation – but they simply did not have the resources to sort and classify the images themselves. The solution was Galaxy Zoo, one of the first projects to successfully mobilize an online crowd to take part in academic research. Within its first year alone, Galaxy Zoo gathered 50 million galaxy classifications through the efforts of enthusiastic volunteers.

The immense success of Galaxy Zoo quickly led to requests from other researchers for a platform that would allow them to harness this ‘people power’. In response, the Oxford team built Zooniverse – an online platform for producing projects tailored to almost any field of study. Early projects included Planet Hunters, which made remarkable discoveries including the identification of the first planet in a four-star system.

In just a few years Zooniverse has become the world’s largest and most popular platform for people-powered research, hosting over 50 projects which allow more than a million people worldwide to engage in a vast range of academic research: studying ancient papyri, identifying plankton or wildlife in Mozambique, helping understand how genes affect behaviour, or annotating diaries from the First World War.

And the effects are not just felt within academic departments. Two projects in particular have had direct environmental impact. Orchid Observers provides a forum for people to identify orchids, note their flowering stages, and upload their own images. The data generated shows beyond doubt that UK orchids are flowering earlier than they used to – a clear measure of the effect of climate change. In Penguinwatch, participants mark penguins, eggs and chicks in their nesting sites, giving researchers detailed data about breeding success. This is revealing the effect of commercial fishing on penguin colonies, and is likely to lead to changes in fishing policy.

A new project, the Planetary Response Network, is trialling something never attempted before: a platform that invites the public to assist in disaster response. Immediately after the Nepal earthquake in April 2015, researchers at Oxford showed – for the first time in this kind of situation – that an online ‘crowd’ could help to quickly generate reliable data to inform search and rescue operations on the ground. The potential of this ‘planetary response network’ is enormous.

Finally, Zooniverse now provides any researcher anywhere in the world with the tools to build their own project, without the need for specialist technological input. In terms of the future of ‘people-powered research’, it seems that the sky – or perhaps the universe – is the limit.

“I love the idea of helping with things that computers can't do and that would take a billion years for one person to do... :-)”

“I joined the Zoo out of curiosity and since joining I have become fascinated with it. It’s great that I can help scientists understand the cosmos and the forum is a great place to talk to other people about new discoveries.”

“If I wasn't disabled I'd be a scientist and so it feels like a tiny tiny way to be "a part" of something that matters.”