Oxford ancient historian, Professor Jonathan Prag, is working with Sicilian partners to develop an online catalogue of the island’s inscriptions, and with high school students to curate a major exhibition of inscriptions in Catania. 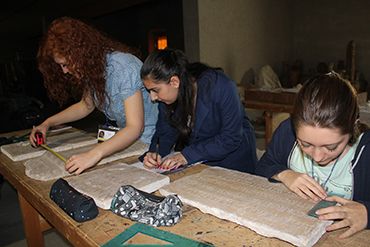 Students working on inscriptions.
Epigraphy, the study of inscriptions, offers an exciting window into the ancient cultures of the Mediterranean. Text written on tombstones, declarations carved on stone and metal, and inscriptions on objects of daily use can reveal how people lived, who had power and how they displayed it, and the laws, treaties and edicts that governed public life.

Sicily is rich in inscriptions and only a fraction have been properly catalogued. ‘Objects may have been found and listed in the early 20th century,’ explains Professor Prag, ‘but often we don’t know which object the record refers to or where it’s stored. Crucially, these individual museum inventories – often handwritten in Italian – aren’t accessible to local people or the wider research community.’

Through the ‘I Sicily’ project Professor Prag is working with museums and archaeological authorities in Sicily to develop a comprehensive, searchable online database of inscriptions. Professor Prag is transferring existing listings onto the database; wherever possible he also carries out an ‘autopsy’, going back to the original object to photograph and interpret it for the database. To date, he has catalogued more than 3250 inscriptions and the work is ongoing.

Local interest in the database has also led to a related project in Catania, funded by an Oxford University Knowledge Exchange Fellowship, working with school students to curate a major exhibition of inscriptions from the city’s museum. Students from the M M Lazzaro High School helped select, clean and display the inscriptions for the ‘Voices of Stone’ exhibition, and produced exhibition materials such as information panels, video installations and reconstructions.

Professor Prag says: ‘I was awed by the talent and hard work of the students. And it was clear how much it meant to them to have direct access to their local history and to share it with their community. Objects such as the tombstone of Tyche (Fortune) recording her age as 13 years, 3 months and 21 days or the statue dedicated to the ‘Genius of the splendid city of Catania’, made a direct connection with their own experience and their pride in their community.’

The project won a prize from the Italian Ministry of Education, Universities and Research in 2018 as the best work exchange project in Sicily, and the money funded a study visit to explore antiquities in London and Oxford. Many of the students have gone on to further study and careers using the artistic skills and experience developed working on the project. The exhibition is now a permanent part of the museum’s displays and can also be seen online.

Working with the students has also influenced Prag’s own interests and priorities. He comments: ‘I’ve always welcomed collaboration with communities but the experience has strengthened my commitment to this. I now realise that motivated non-experts can engage with this sort of difficult material to an extremely high level, and how much they can both contribute to, and gain from, historical projects such as this. We’ve now agreed plans for a three-year project to work on the Greco-Roman theatre of Catania and I look forward to working with archaeological authorities and the community to develop this.’

Jonathan Prag is Professor of Ancient History at Oxford University

“The project facilitated a genuine engagement by the school in the study, interpretation and presentation of the archaeological heritage of the region. The direct engagement with the objects in the museum, supported by experts in the field, has also proven genuinely formative for the students, a number of whom have chosen to pursue further study in the fields of archaeology, cultural heritage, and conservation.”