Research in the Department of Chemistry into the action of natural enzymes is finding a commercial application in the global flavours and fragrances market. 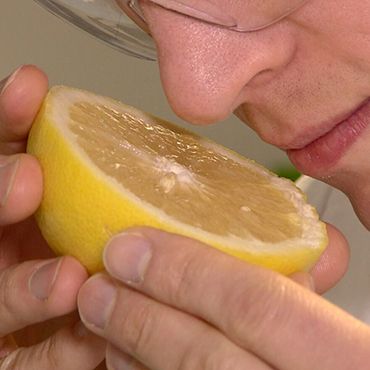 One of the key contributors to grapefruit’s unique aroma is a terpene called nootkatone. It is extremely important in the food and drink industry, being used to flavour drinks, puddings and confectionery. It is also one of the most expensive flavour ingredients in the world: around 400 tonnes of grapefruits are needed to produce just one kilogram of nootkatone – and grapefruit production is limited, which further restricts the supply of nootkatone.

Now Oxford Biotrans, a spin-out from the Department of Chemistry, has come up with an innovative and commercially-viable solution based on valencene, another terpene found in oranges, which is vastly cheaper to extract. Valencene and nootkatone molecules are very similar and it is possible to convert one into the other; the process involves dropping just two hydrogen atoms and adding an oxygen atom. This sounds simple enough – but using existing methods the conversion can only be achieved by the use of heavy metal catalysts and peroxides, so the nootkatone that results cannot be designated ‘natural’.

Oxford Biotrans, however, is pioneering a new way to turn valencene into nootkatone, using the enzymes that catalyse these types of reactions in nature. The technology is based on over 20 years of enzyme research by Professor Luet Wong and his group, who have taken a naturally-occurring bacterial enzyme and made small but specific changes to its structure to enable it to catalyse the conversion of valencene into nootkatone.

The resulting enzyme (now patented) can produce high yields of valuable nootkatone which will be manufactured and marketed by Oxford Biotrans with De Monchy Aromatics, an international supplier of aroma chemicals and essential oils. Unlike other methods, Oxford Biotrans’ process can truly be designated ‘natural’, since the starting materials and final product are all found in nature and the conversion is carried out using an enzyme. In line with strict EU and Food Standards Agency guidelines, the final product will be labelled as natural. This method of production is also better for the environment, since it avoids the use of heavy metals and peroxides.

The technology has a wide range of other applications: it could open the door to new fragrances, pharmaceuticals and natural pesticides. Turning a compound from orange into one found in grapefruit may be only the first step in this exciting development. The importance of the research has been recognised nationally, with Professor Wong reaching the finals of the BBSRC Innovator of the Year competition in 2017, and Oxford Biotrans winning a Royal Society of Chemistry Emerging Technology Award in the Food and Drink Sector in 2018.

'As consumer demand for natural flavours and fragrances continues to grow, this collaboration puts us at the leading edge of a highly competitive market as well as ushering in a new phase of manufacturing for De Monchy Aromatics.'