Since 2003, researchers at the University of Oxford have been conducting research on approaches to greenhouse gas removal from the atmosphere. 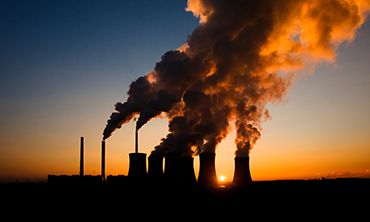 The 2015 Paris Agreement of the UN Framework Convention on Climate Change aims to pursue efforts to keep temperatures at no more than 1.5°C above pre-industrial times. Meeting these ambitions will require not just extensive cuts to emissions, but also the active removal of greenhouse gases from the atmosphere, and their storage. This process is called greenhouse gas removal (GGR).

The research, led by Professor Gideon Henderson and involving a number of other researchers, included a (2018) Royal Society publication which analysed the potential risks of a suite of GGR approaches (including methods such as enhancing mineral weathering, growing forests, and direct capture of CO2 from the air - all aimed at counteracting hard-to-cut emissions from heavy industry, agriculture, and aviation). The study developed the first quantitative assessment of the GGR potential for the United Kingdom and demonstrated that there was potential to balance residual mid-century emissions and therefore achieve net zero greenhouse gas emissions in the UK.

The research also directly informed the consideration of GGR and emission targets by the UK Committee on Climate Change. As part of its Net Zero – The UKs contribution to stopping global warming report (published in May 2019), the Committee recommended a 2050 net zero target to the UK Government, which was accepted and signed into law in June 2019. The University’s research has also led to the development of government work on GGR policy, governmental funding of significant further GGR research to inform that policy, and an increased public and international recognition of the necessity of
GGR to achieve net zero emissions and avoid dangerous climate change.

More recently, in May 2021, the Royal Society report’s recommendations led UK Research and Innovation (UKRI) to invest £31.5 million in five interdisciplinary demonstrator projects across the country and a central hub located at the University of Oxford to investigate the viability of five innovative methods of large-scale GGR. To help the UK achieve its net zero target by 2050, the demonstrator projects aim to better understand the effectiveness, cost, and limitations of each method of large-scale GGR.

Encompassing a dozen universities and with funding for nearly five years, this is the UK Government’s largest-ever research programme to understand and scale-up GGR techniques. The programme is part of the second wave of the Government’s Strategic Priorities Fund, which invests in high quality multi and interdisciplinary research. The central directorate hub, located at the University of Oxford and led by
Professor Cameron Hepburn, will coordinate the national programme, undertake critical research, and liaise with demonstrators, business, and policymakers to evaluate different approaches to GGR.

Cameron Hepburn is Professor of Environmental Economics at the University of Oxford, and Director of the Smith School of Enterprise and the Environment. He is also Director of the Economics of Sustainability Programme, based at the Institute for New Economic Thinking at the Oxford Martin School.