Researches from the University of Oxford are developing ways to help businesses tackle poverty across the world. 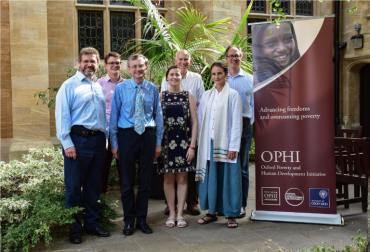 SOPHIA Team University of Oxford
In 2019, researchers from the Oxford Poverty and Human Development Initiative (OPHI) launched SOPHIA Oxford, the University’s first social enterprise spinout. For over a decade, OPHI has developed tools to identify and tackle ‘multidimensional’ poverty – i.e. deprivations experienced at the individual and household levels, including health, education, and living standards. Established as a not-for-profit partner of OPHI, SOPHIA aims to bring the methods created by OPHI and make them available to businesses who want to positively impact the wellbeing of their employees and help efforts to tackle poverty. SOPHIA’s goal is to provide these businesses with tools to measure and respond to poverty amongst their employees and their families, contractors, and in their supply chain.

SOPHIA has an exclusive worldwide licence to OPHI’s Business Multidimensional Poverty Index (bMPI). Drawing on research on multidimensional poverty led by Professor Sabina Alkire at the University of Oxford, the bMPI measures poverty in its many dimensions, analysing not just who is poor in a given business but how poor they are, and the multitude of factors keeping them in poverty. The bMPI uses a survey approach that enables companies to see what issues need to be addressed, how to prioritise a response, redirect resources for larger impact, and verify change in people’s lives. The approach is based on OPHI’s National Multidimensional Poverty Index (MPI), which has been adopted by the United Nations Development Programme, the World Bank, and as an official measure of poverty by more than 30 countries in Africa, Asia, and Latin America. Both the National MPI and the Business MPI use the same indicators of poverty, thus facilitating coordination between businesses and governments to end poverty.

The bMPI was developed in partnership with Horizonte Positivo, a private non-profit association in Costa Rica. Since 2017, Horizonte Positivo has been working to launch the bMPI across Costa Rica, and to date, it has assisted more than 45 companies and surveyed around 34,000 households, meaning more than 3,900 households have benefited from the solutions developed using the bMPI. SOPHIA has learned from this successful work, and has begun trials in Guatemala and Chile, with its products being primed for roll-out across Latin America.

Based on the bMPI method, SOPHIA’s new Wise Responder Action Kit - which provides companies with the ability to understand their employees’ living situations and manage programmes to improve their quality of life – is available to companies in Latin America and the Caribbean. The Wise Responder Action Kit includes a survey for the whole of Latin America and the Caribbean that provides companies with knowledge of employees’ lives and how to respond to create wellbeing; an information management platform that prioritises, tracks and integrates solution reporting; and training and support to implement surveys and solutions.

Researches from the University of Oxford are developing ways to help businesses tackle poverty across the world.