In Africa around 275 million people don't have access to a decent reliable water supply. Many rural communities rely on handpumps for their daily water needs. Yet in Africa, 1 in 4 handpumps are broken at any one time. This can have a devastating effect on people's lives. 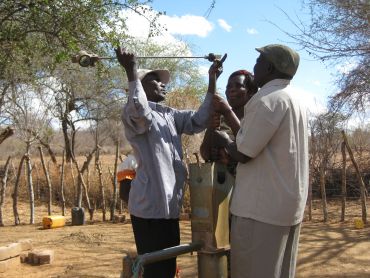 Long delays to repair out-of-action handpumps often force households to collect water from alternative distant or dirty water sources. When a pump breaks in a school, clinic or community, it usually takes weeks or months to repair. The health, education and economic costs, particularly for women and girls, are enormous but avoidable.

The Smart Handpumps project began as a DFID-funded research project at the University of Oxford aiming to improve the sustainability of water supplies in rural Africa through innovative use of mobile data. Many handpumps in the region were frequently left broken simply because the mechanics were not aware that repairs were needed. The Smart Handpump technology, developed by Patrick Thomson of the Smith School of Enterprise and the Environment (SSEE), converts existing handpumps into 'Smart' handpumps, by installing a novel transmitter into their handles. The data from these has allowed the team to design a new maintenance model that allows a team of mechanics to act quickly to repair them faster. A trial of Smart Handpumps across two counties in Kenya reduced the average downtime of a handpump to less than three days, a huge improvement on the 30 days that pumps had previously been out of order. Jacob Katuva and Cliff Nyaga, who respectively completed their DPhil and MSc at the School of Geography and the Environment, now run FundiFix in Kenya, currently operating in two counties, and serving over 70,000 people.

Research on institutional risk and culture, led by Johanna Koehler (SSEE), and the success of the FundiFix model in Kenya has led to the establishment of Water Services Maintenance Trust Funds through which funders can provide transparent performance-based payments for effective maintenance. This work has supported six DPhil students, including Heloise Greeff and Farah Colchester, supervised by David Clifton (Engineering Science), who have been using machine learning techniques with Smart Handpump data to develop further applications with potential to improve and protect rural water services in Africa.

This interdisciplinary research project is now part of the wider SSEE Water Programme led by Rob Hope, and includes social science, natural science and engineering. The research has led to the creation and incubation of Fundifix, alongside a trust fund which combines user, private and public finance. Findings have influenced water policy in Kenya at a national level, and the approach will now be tested by UNICEF in schools in Bangladesh.

Smart Handpumps was one of 13 projects chosen by the seven UK Research Councils to be highlighted as ground-breaking and innovative research at the RCUK's first “Research, Innovate, Grow” showcase event in 2015, and was the overall winner of the inaugural Vice-Chancellor's Innovations Award in 2018. Our recent crowdfunding campaign is allowing us to develop the technical side of the system further, enabling us to work with more organisations to bring more reliable water services to more people. Since the initial DFID funding in 2011 that started this all, Smart Handpumps have been a key part of a number projects, funded by NERC, ESRC, GIZ, UNICEF and DFID, as well as internal funding through GCRF, the John Fell Fund, and the Skoll Centre.