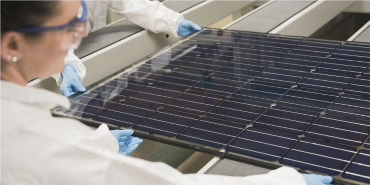 PV Solar Panels
The market for solar photovoltaics (PV) has greatly expanded in recent years, but its contribution to world energy is still small, and the technology remains more expensive than fossil fuels. Silicon, used in the vast majority of commercial solar cells, is cheap and abundant, but it is costly and energy-intensive to produce it in the pure crystalline form required for PV. For solar power to rival fossil fuels globally, the technology needs to become even cheaper and more efficient.

Since 2009, cutting-edge research led by Professor Henry Snaith at the University of Oxford has been aiming at delivering low-cost, high-efficiency PV technology. Based on his research, in 2010, Professor Snaith co-founded Oxford PV as a spinout from the University of Oxford (and the University still holds an ownership stake in the company today). Professor Snaith’s previous academic work had already been extensively supported by the Engineering and Physical Sciences Research Council (EPSRC), and Oxford PV received early financial backing from Innovate UK to explore the commercial possibilities of low-cost and transparent solar cells.

The company uses a crystalline material called perovskite. Oxford PV initially investigated perovskite as a potential replacement for the dye in ‘dye-sensitized’ solar cells, however, in 2012, Professor Snaith and his colleagues demonstrated that perovskite was, by itself, an excellent semiconductor. This breakthrough meant that PV cells could be built with a simple stack of thin layers, with the potential to simplify the manufacturing process and increase the efficiency of solar PV cells.

Applied as a thin film layer in tandem with an active silicon cell, perovskite can boost cell output power and reach efficiency levels in excess of 30%. Typical silicon solar cells convert around 20-22% of the available solar energy into electricity. But in June 2018, Oxford PV’s perovskite-on-silicon solar cell set a world record – 27.3% certified efficiency – exceeding the highest ever performing single-junction silicon solar cell. In December 2020, the technology set another new world record, this time of 29.5% certified efficiency. In the future, perovskite could become even more efficient, as it can be ‘tuned’ to different parts of the solar spectrum. Given these improvements in efficiency and the relative abundance and low cost of the constituent materials in perovskite, these solar cells could provide a rival energy source to fossil fuels.

Originally based at Begbroke Science Park, Oxford PV is now based at Oxford Industrial Park with industrial capabilities in Brandenburg an der Havel, Germany. Having grown its team from 5 staff in 2011 to 95 in 2019, the company is the technology leader in the field of perovskite solar cells, and has the largest global team exclusively focused on developing and commercialising a perovskite-based solar technology. More importantly, having recently built the world’s first volume manufacturing line for perovskite-on-silicon tandem solar cells, in 2022, Oxford PV will be the first company to sell these next-generation solar cells to the public. These initial products, designed for residential roofs, will generate 20% more power from the same number of cells. With further development, Oxford PV believes future solar cells will be improved significantly, generating more affordable clean energy, accelerating the adoption of solar power, and addressing climate change.