Knowledge exchange work at the University of Oxford has led to the successful uptake of science in the development of new industry standards for oil palm plantations. This is helping to protect rainforests, maintain biodiversity and make palm oil production more sustainable. 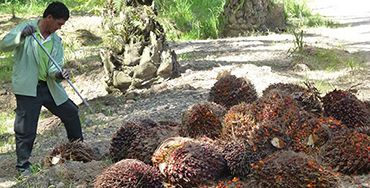 Palm oil is the world's primary source of vegetable oil, and also increasingly used as biofuel, which further drives up global demand. Around 85% of oil palms are grown in South East Asia, and rapid expansion of the industry here has caused widespread destruction of the rainforest to make way for highly-productive plantations.

This has led to a widening effort to grow palm oil sustainably, so it can provide an income for growers without losing valuable rainforest. (Oil palms produce at least six times more oil per hectare than any other crop, so avoiding palm oil altogether would actually be a less sustainable option.) But the industry response has been patchy, with differently-sized areas of forest set aside on plantations and no proof that they allow the forest to perform key ecological functions.

By working closely with the palm oil sector University of Oxford ecologist and knowledge exchange fellow, Dr Jennifer Lucey, identified this key knowledge gap and conducted pioneering research, funded by NERC, to calculate the minimum forest patch size that needed to be set aside on agricultural land to maintain biodiversity. She found that each patch must have a core area of at least 200 hectares of rainforest to be able to support significant numbers of species and allow regeneration of dominant trees.

Dr Lucey then worked with key stakeholders including Greenpeace International and the oil palm industry itself to develop a 'no-deforestation' toolkit, the High Carbon Stock (HCS) Approach. The set-aside thresholds demonstrated by her research have been used to develop new industry standards which have been adopted by many of the largest oil palm growers and applied across millions of hectares of land, saving important fragmented and degraded forest.

In November 2018 the Roundtable on Sustainable Palm Oil (RSPO) - an international body that certifies palm oil as sustainable - announced the adoption of the HCS Approach in their own criteria for strengthened 'no deforestation' standards, requiring all its members to use this toolkit for new plantings in order to obtain the RSPO Trademark. Dr Lucey’s research is also likely to benefit small palm oil producers for whom the costs of obtaining RSPO certification often outweigh the benefits. She has worked with the RSPO to create maps of the most valuable conservation areas, which will allow the many smallholders operating in low-risk areas to become certified through a simplified process, hopefully increasing uptake.

By adopting a standardised evidence-based approach, designed in collaboration with scientists, it is hoped that not only will more forest be protected, but areas will be designed to be larger and better connected, allowing biodiversity to persist in oil palm landscapes.

“The 2018 Impact Awards shortlist recognises environmental science that has had a significant impact on the economy or society in the UK or internationally. Dr Lucey's research on forest thresholds has led to more sustainable practices being adopted by international palm oil companies, protecting the biodiversity of the rainforests in the tropics. Since being shortlisted by NERC, the impact of her research has been demonstrated further in the RSPO's adoption of the HCS approach, which is underpinned by this environmental science. Dr Lucey's work is of significant benefit both to the countries supporting the sustainable growth and export of palm oil, and to consumers in the UK and worldwide keen to support sustainable palm oil products.”