The Oxford gadget that could revolutionise museum visits for people who are blind or partially sighted. 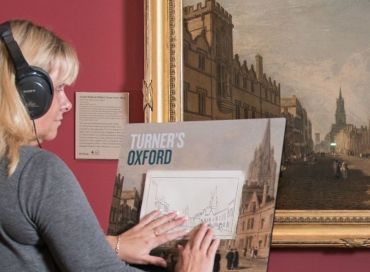 Tactile exhibit in the Ashmolean

Tactile exhibit in the Ashmolean

For most people, going to a museum is about seeing exhibits - and not even guided audio tours can replicate that experience for people who are blind or partially sighted. But a project being pioneered by Oxford University Museums Partnership could revolutionise how they enjoy their visits.

Museums already have devices to give audio and/or tactile information to visitors who are blind or partially sighted. But they tend to be tailor-made for particular exhibits, and they cost in the region of $10,000 each. 'They're great, but it doesn't mean you'll find them in the museums, because they're too expensive,' says Nicola Bird, Community Engagement Officer with Oxford University museums.

Jessica Suess, Digital Partnership Manager at the Oxford Museums, wanted to develop a single device that could stand beside an exhibit to deliver both audio and touch feedback, but which could also be repurposed by museum staff for other exhibits.

Iain Emsley, an IT developer with the Oxford e-Research Centre, said: 'It sounded like an interesting challenge, really novel, and it does have a very beneficial outcome - it's not just a piece of pure research.'

Alongside the technical challenge of providing equipment that visitors who are blind or partially sighted can use, there is another, more fundamental challenge - how to translate visual information about paintings, photographs, or maps into a different sensory language, touch.

Researchers looked at tablets, at existing internet-based touch interfaces for people who are blind or partially sighted, and at the £30 credit-card-sized Raspberry Pi computer. But first they looked at 'swell paper', a material which can raise an outline when heated. For one of the Ashmolean's prize exhibits, JMW Turner's painting of Oxford High Street, a swell paper tactile aid could carry an outline of the Oxford skyline, the road, windows and figures. Though relatively cheap, swell paper may not be robust enough to survive repeated handling. Investigators are looking at several plastics that would be more durable but still thin and malleable.

The team also wants to incorporate a sensor so that when a particular part of the tactile surface is touched, an audio component such as a commentary is triggered. On Turner's painting, one landmark might trigger the words: 'This is Carfax Tower, a crenellated Saxon tower.'

With support from Dr Torø Graven of Oxford's Department of Experimental Psychology, the first part of the project focused on cracking the tactile challenge. How fine should lines be, what textures should be used, how are shapes, curves and angles experienced by touch? What about the use of colour for partially sighted people?

The starting point that it is not enough simply to replicate an image's shape in a raised outline. 'Certain aspects have to be accentuated,' says Bird.

Focus groups have been under way this for more than a year to find how potential users want to access information, and how much they would like. 'People who are blind or partially sighted are leading on this piece of work,' says Bird. 'They tell us what's good, what's not, or what they'd like more of.'

She stresses that it's not just about appreciating the exhibits, but about enjoying the whole museum experience, having an enjoyable time out with family or friends. A specially arranged guided audio tour can furnish that, 'But what we're trying to do is make it so that you can turn up and there are things in place so you can experience and enjoy the museum just like a person who is sighted. We're trying to get parity of access.'

For any system to work well, it must also be user-friendly for the museum staff. Programming the device with the right sound and touch information must be a quick and straightforward task. It must be easily repurposed for any given exhibit. For this reason, the sound-and-touch device will probably be managed via a web-based interface - a tool that's now almost universally familiar. Compared to any conceivable tailor-made alternative, web interfaces have a major additional advantage. With innumerable software applications constantly being developed, the team is unlikely to need to build specialist software from scratch.

Funded by Oxford University's IT Innovation Fund, the project began last September 2016 and runs until May 2018. A first prototype was placed in the Ashmolean January this year. The software being written by Emsley will be made openly available to other potential users.

At any other research university, the project might not have taken off at all, says Emsley. 'One of the special things about Oxford is its incredibly rich set of collections with a very passionate set of curators who are trying to engage with the community. There's also a much wider set of networks of people who are very good connectors, who work across disciplines, across silos, to bring people together to get the best outcome rather than just looking at particular area they work in. It's the confluence of those that makes Oxford a very good place for doing this.'