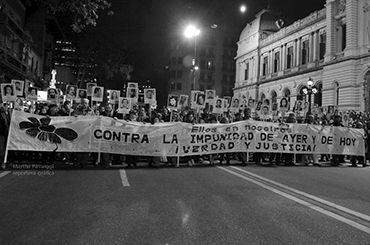 “The original ‘Operation Condor’ was the covert cooperation of military dictatorships in South America in the 1970s to silence political opponents in exile,” explains Dr Francesca Lessa. “Our project of the same name attempts to bring justice and accountability to victims of these transnational human rights abuses.”

Even after democratisation processes in South America since the 1980s, transnational human rights abuses (those involving more than one state) were difficult to investigate, leaving families not knowing what had happened to loved ones and without justice or accountability for disappearances and illegal killings.

“It was a Pandora’s box which governments did not want to open,” explains Lessa. “Countries were able to pass the blame and say ‘that happened in Argentina or Brazil or Paraguay, it’s nothing to do with us in Uruguay or Chile – even though they had been deeply involved. Documents were hard to find and there was a culture of secrecy and impunity.”

Lessa, who as a PhD student investigated accountability for human rights violations in Argentina and Uruguay, started to research transnational crimes in 2013 – collecting information about cases, interviewing victims, collating information from national databases, and trawling archives of government departments and NGOs.

“As I developed the research and analysis, people began to also send me documents, says Lessa. “I verified them of course, but it was great to have a network of local ‘research assistants’ digging up information from their contexts! I realised how many people were affected by these transnational crimes in different countries, and that they had a lot to share with each other. That’s why we decided to organise the knowledge exchange workshops.”

Three workshops in Chile (2015), Uruguay (2016), and Argentina (2018), coordinated with local partners, brought together over 200 South American academics, lawyers, judges, prosecutors, victims, human rights activists and policy-makers, and created a lasting network of collaborators who continue to interact and learn from each other.

One Chilean lawyer commented that the workshops, "broke down the barriers that separate us and prevent fluid communication… [and were] a unique chance… to share experiences and lessons learnt”. Public meetings and media interviews also helped local communities to understand and acknowledge the significance and legacy of these historical crimes.

The project has also collated its growing evidence into a unique database which now offers an invaluable reference for research on transnational violations and has helped shape current trials. In 2019 Rome’s First Assize Appeals Court incorporated into its proceedings recently declassified documents collected by Lessa; this contributed to overturning 18 acquittals and the sentencing of 24 South American defendants to life imprisonment for the murders of nearly 40 people from Italy and Uruguay.

The Inter-American Commission on Human Rights used evidence from the database in deciding a high-profile case involving the forced disappearance in 1976 of a Uruguayan couple and their young children in Argentina, a case which was referred to the Inter-American Court of Human Rights in 2019. The database helped the Commission establish for the first time that Uruguayans accounted for half of all victims of Operation Condor.

Reflecting on the project, Dr Lessa concludes: “What we did was like a good version of Operation Condor, countering the negative collaboration of military dictatorships with a positive partnership of our own. It allowed us to shed light on neglected crimes and is a great way to show how academic research can have a practical application. Helping to secure justice, truth and accountability for victims is more satisfying than any book or journal article.”

Dr Francesca Lessa is Marie Skłodowska-Curie Research Fellow at the Latin America Centre in the Oxford School of Global and Area Studies.

“Dr Lessa compiled the only database of victims of transnational human rights violations in 1970s’ South America. It offers an innovative tool for mapping criminal prosecutions and is especially valuable because the systematisation of this information has not been carried out by any State or agency.”