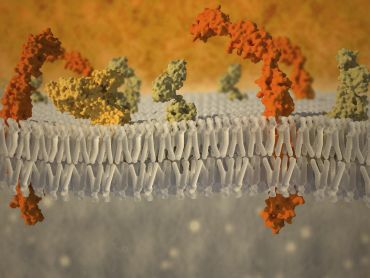 Artistic impression of a plasma membrane of a human cell. Photo credit: Shutterstock
Drug development requires long-term financial commitment with varying success rates at each stage of the process. This means it is often not viable to develop treatments for rarer diseases or conditions which may only affect a relatively small percentage of the population.

OMass’ work is based on novel mass spectrometry approaches, developed in Professor Dame Carol Robinson’s Laboratory, which enable the study of proteins in the cell membrane (the gatekeepers of the cell, controlling the entry or exit of substances). Essentially, proteins in the cell membrane are projected into the gas phase, rather than studied in a liquid phase, which is often used. According to Professor Robinson, “this allows a new view – a different way of examining proteins, that can help scientists see something different… something they might be able to exploit to develop treatments”.

Established in 2016 as OMass Technologies with investment from Oxford Sciences Innovation (now Oxford Science Enterprises), the company was able to start commercial operation. A successful award shortly afterwards from the UK Government’s Innovate UK Competition, meant that it was able to further develop its prototype drug discovery platform.

As this patented technology enabled the rapid identification of small molecules that modulate the membrane protein assemblies associated with disease, it was soon attracting attention from pharmaceutical and biotechnology companies actively researching membrane protein therapeutic targets.

However, OMass recognised that if it was to meet the growing demand for its services, it needed further investment and approached Syncona – a FTSE 250 investment company – in 2017. After an initial pitch, Syncona recognised the potential of the technology and proposed that, rather than working with external companies, OMass should use its technology to develop its own therapeutics in-house. As a result, the company relaunched as OMass Therapeutics in 2018, focusing on developing treatments for a range of rare immunological and genetic diseases.

OMass has grown rapidly since launch, from 3.5 staff after the first year of trading to a current headcount of over 40, including chemists, computational scientists, pharmacologists, biochemists, and others. To complement its existing mass spectrometry approaches, OMass acquired Nottingham-based company, Excellerate, which specialises in cell-based systems used to assess factors in healthy and diseased cells.

Today, OMass Therapeutics is working on drug discovery programmes for a range of diseases from a rare neurodevelopmental disorder to inflammatory bowel disease. “We’re still some way from having a therapy ready for patient use, but the potential is definitely there,” says Professor Robinson. “And the molecules we’ve found are distinct from those identified by other screening approaches, showing the value of the approach.”

“It was very significant that we managed to secure investment from Syncona, which has the vision and commitment to support such long-term work. This has allowed us to focus on rare diseases, which may not be a viable proposition for other companies, but where in time new drugs could transform the lives of patients with some of the most severe and chronic diseases.”

“For me personally, it has been an extraordinary journey,” she continues. “I’ve had to adapt and learn new skills… going from being a pure researcher to starting a company with my co-founders and then pitching to investment companies and now being part of a thriving enterprise. I would be delighted to get to the point where my initial lab-based research was helping to improve patients’ lives and I am very excited to see what we are able to achieve over the next few years.”