The OxQUIP project is developing new, more objective ways of measuring symptoms in diseases such as Parkinson’s, in order to speed up diagnosis and the hunt for effective treatments. 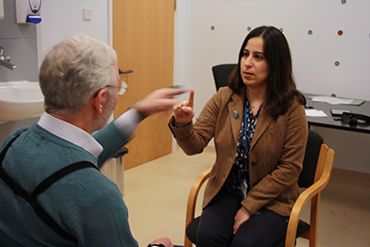 OxQUIP Parkinson’s clinic at the John Radcliffe Hospital.
Many neurodegenerative conditions involve problems with movement. Doctors typically assess people's stiffness, slowness, or tremors when they come to a neurology clinic. They note down patients' scores on a 'clinical rating scale' – a measurement which relies solely on the clinician's own impression of the person's condition.

The issue is that different doctors may give different scores, and the statistical analysis can be problematic and imprecise.

The OxQUIP team, headed by Professor Chrystalina Antoniades, are developing objective numerical measures to help doctors accurately diagnose disease and monitor its progression. They are doing this by precisely measuring subtle abnormalities of the speed and coordination of patients' movements such as saccades (fast eye movements), hand movements and gait. They see patients every three months, and use 'wearable' sensor technology to build up a detailed picture.

All the data gained from the clinics is fed back into the research to help refine the tests still further, making them easy to use and highly reliable in the conclusions they generate. The goal is to replace clinical rating scales with objective numerical measures in both everyday clinical practice and scientific research.

This will transform the way in which medical researchers evaluate new treatments. It might take two years to determine whether a drug works, if the trial is forced to rely on data produced by the current clinical rating scale. This is time that can ill be afforded given that only one in ten drugs trialled eventually makes it to clinical use.

More precise measurements could help to identify an ‘early signal’ of drug effect in order to help decide whether clinical trials should continue or not. Time and money can then be shifted to the next target, accelerating the path to discovery.

'We are thrilled that our wearable technology was chosen to be a part of this pivotal study with such innovative researchers...'