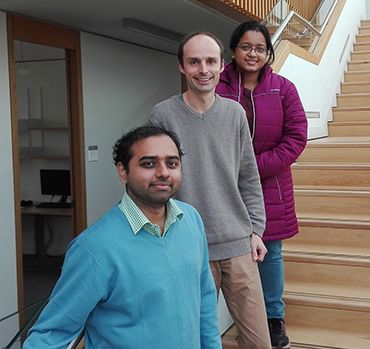 Dr Sourav Mondal and Dr Raka Mondal from the IIT Kharagpur team with Dr Ian Griffiths from the Mathematical Institute.
The Ganges–Brahmaputra Delta is a global hotspot for arsenic groundwater contamination. Naturally occurring arsenic concentrates in water drawn from deep wells, creating a major public health issue in West Bengal and Bangladesh, which has been described as the largest mass poisoning of a population in history. Arsenic is a naturally occurring element found in the rocks and earth’s crust, and is among one of the most hazardous contaminants in drinking water sources. Arsenic is embedded in geological sources and enters into the water supply as the rocks are eroded by the flow of water from rivers and rainwater. Further, use of manure containing phosphate, and other agricultural activities break down different rocks and release arsenic into natural water. Consequently, if not properly managed, the level of arsenic contamination will continue to rise because of human activity and agricultural growth. At present, more than 200 million people and over 70 countries in the world are affected by arsenic contamination. The WHO has declared 10μg/L as the safe limit of arsenic in drinking water in 2000.

A novel technology has recently been discovered by Dr Griffiths’s collaborator, Professor Sirshendu De (IIT Kharagpur), which uses naturally abundant laterite soil to filter arsenic. The technology is ultra-low-cost and has the potential to provide a global breakthrough, supplying clean water to the world. However, as with any other adsorption technique, such filters have a certain lifespan, beyond which the filter media becomes saturated with contaminant and the filtrate no longer meets the safe limit for drinking water. For example, a household Brita water filter should be replaced after around two months. Thus, for the design and successful implementation of an adsorption technology, it is vital to be able to predict the long-term behaviour of the filter, which can only be obtained through the development of mathematical models.

Dr Griffiths has developed a mathematical framework using homogenization theory and asymptotic analysis that distils the complex process into a simple predictive tool, which predicts the two key features: how frequently filters must be replaced, and how the filters may be upscaled to serve, for example, a school or community.

The collaborative developed technology has been accepted by the Department of Science & Technology, Union Government, the Public Health Engineering Department of West Bengal and the West Bengal Arsenic Task force. The filters currently serve more than 5000 people, and 40 community-scale filters are now being deployed. The mathematical tools provide the essential guidance needed for engineers to maintain current filters and deploy these new filters in a cost-effective manner. Dr Griffiths says “Interdisciplinary approaches are becoming increasingly important to make progress in present-day challenges and this project is a clear example of such a case."

The team is now developing their ideas for the removal of other contaminants from water, including fluoride and reactive dyes that arise from the clothing industry. Their ultimate objective is to provide potable water for the world in an affordable way.

This collaborative project has been funded by the Global Challenges Research Fund (GCRF-UK), University of Oxford.