The Misbehaving Bodies exhibition brought together the work of two artists of different generations, Oxford University’s Oreet Ashery and feminist artist Jo Spence, who died with cancer in 1992. 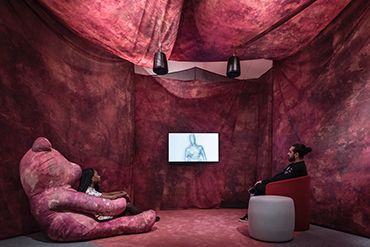 Part of the exhibition space conceived by Oreet Ashery.
Commissioned and hosted by Wellcome Collection, London, it ran from May 2019 to January 2020, attracting more than 800 visitors a day. The exhibition included ongoing access to online material and a comprehensive public events programme – providing audiences with the opportunity to process and digest the work to its full potential.

Jo Spence documented her illness in the last decade of her life, and the works in the exhibition covered her diagnosis, criticisms of conventional cancer treatment, her feelings of being infantilised by the medical establishment, and her attempts to reclaim her agency as a person affected by illness.

Ashery’s works included her 2016 web series Revisiting Genesis (Jarman Film Award winner 2017), which explores death and dying in the digital age through short video vignettes involving artists with life-limiting and chronic health conditions alongside nurses and actors. The film particularly explores the emergent field of posthumous service technologies such as Facebook memorialisation, wills to protect one’s digital footprint, interactive augmented reality gravestones, and posthumous avatars – which can both comfort loved ones and result in commercial exploitation. A new commission, Dying Under Your Eyes, documents the intimate process of her father’s illness and death using footage from her mobile phone.

The exhibition space was conceived by Ashery as an ‘afterlife community centre’, to make people feel as though they were being comforted. The space includes small viewing hubs made of dyed fabric and huge life-sized teddy bears with exceptionally long arms for hugging, which visitors could lounge against – the opposite of a clinical conventional contemporary art environment or indeed a hospital.

Impact of the exhibition

Local and international audiences to the exhibition included members of the public, as well as specialised art and health practitioners, and visitors to nearby University College Hospital.

Feedback from the public and Wellcome staff indicated that visitors valued the exhibition as a community space, which allowed them to reflect on their own issues of grief, illness, care, and vulnerability; and that it prompted Wellcome to plan activities to enable staff to look after their health and support others.

The exhibition also influenced Wellcome’s artistic practice, with Ashery the first artist invited to co-design the exhibition with the architects and to help envision the public engagement programme – an innovation which Wellcome have indicated they would like to continue in future.

Oreet Ashery comments: ““The popularity of the show points to an urgent public need for engagement with illness, dying, death and care within an intergenerational context, produced on this occasion by the dialogue between Spence and myself.”

“In particular, the contemporary expectations of artists and cultural workers to self-represent on media platforms and to maintain both on- and offline visibility at all costs – alongside a push to overproduce work – generates the conditions which lead to artistic and cultural extraction. Such extraction often leads to chronic illness, mental and physical sickness, and partial withdrawal – which often remains unspoken for fear of losing-out on professional opportunities. It is in this context that the exhibition is so important in making visible and expanding the discourse of self- and collective care.”

“In general, galleries and exhibition spaces often think of diversity in terms of gender, race, and class, but I hope Misbehaving Bodies has shown the need for health diversity and for representations of health issues to move from medicalised models to approaches which recognise individuals within health care systems, and the spectrum between health and illness we all exist on.”

Ashery was awarded the Jarman Award in 2017 for Revisiting Genesis and a Turner Prize Bursary in 2020 for her work on Misbehaving Bodies.

“Absolutely what the Wellcome Collection should be spending its money on. When compared to the sterile, bleached world of medicine – and the sugary pink of cancer charities and ‘women’s health’ – this strange, messy, flawed, incomplete, artistic, female take on sickness is more than welcome.”

“An invigorating – if ultimately heart-breaking – experience.”