New approaches using Mindfulness-Based Cognitive Therapy (MBCT) are being used to treat and prevent depression for millions of people around the world. 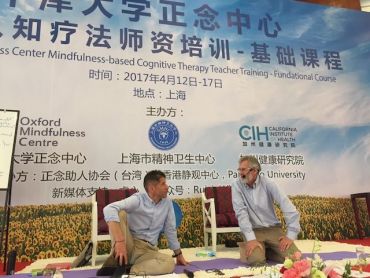 Mark and Willem teaching in China.
The World Health Organisation estimates that more than 250 million people suffer from major depression globally, making it a leading cause of disability.

Very often depression recurs and can continue to recur throughout a person’s life. This has a significant socioeconomic impact in terms of healthcare costs and lost productivity, as well as the toll it takes on individuals and those around them.

Treatment can be effective and includes anti-depressants and ‘talking therapies’ such as Cognitive Behavioural Therapy (CBT), but these treatments do not work for everyone. Crucially, antidepressants only work for as long as someone continues to take them.

Research at Oxford University and partner institutions over the last decade has developed, tested and rolled-out new approaches to treating and preventing depression – giving those at risk, access to proven tools to help manage their condition long-term.

Mindfulness-based Cognitive Behavioural Therapy (MCBT) was first developed by Mark Williams, John Teasdale (Cambridge) and Zindel Segal (Toronto) in the early 2000s. The approach teaches people a range of skills to prevent depression, including learning to view negative thoughts as passing mental events, rather than facts.

“Cognitive behavioural therapy teaches people to challenge their negative thoughts but for people with recurrent depression this can be really hard,” explains lead researcher, Professor Willem Kuyken. “MCBT takes a slightly different approach. It encourages people to accept their thoughts, stand back from them, and realise they will pass.”

Numerous randomised controlled trials have shown that MCBT is effective, and more recent work conducted at Oxford has shown that the ability to decentre from negative thoughts and learn to be kind and self-compassionate, is critical to the success of the approach. Importantly, several trials have now shown that MBCT is an effective alternative to long-term use of antidepressants.

Over the last ten years, the Oxford team have worked to embed MBCT into policy and practice and ensure access to the therapy for millions of people around the world.

The team have developed and delivered training for more than a thousand therapists, both in the UK and internationally, including in countries such as China, Brazil, Singapore, and India where no MCBT services previously existed. Training manuals, guidance materials, and practice standards developed at Oxford have provided a firm foundation for others to extend provision.

MCBT is now one of the recommended interventions in many international clinical guidelines including the USA and Canada. In England, patients have access to MCBT through the NHS Improving Access to Psychological Therapies (IAPT) programme, with evidence from these services suggesting that it helps people enhance their mental health and sustain their recovery from depression.

Mindfulness courses have also been offered to UK members of parliament, encouraging the formation of the Mindfulness All-Party Parliamentary Group to promote international engagement with the approach.

A pilot project working with prisoners and staff at Pentonville Prison in the UK, also showed demonstrable benefits of MCBT in reducing self-harm and conflicts with staff. MBCT has now been rolled out to further prisons in the UK and Taiwan.

“Depression is a major global public health crisis affecting nearly one billion people at some stage in their lives,” says Kuyken. “It’s not enough to wait until people get depressed, and then deal with the symptoms. We need to move beyond treatment to focus on prevention; and more than this, on promoting mental health through lifestyle changes, in the same way as we have done with heart disease, for instance.”

“People learn foundational skills for life in MBCT that they can use not only to cope with the everyday strains and pressures that can lead to poor mental health, but also to enjoy greater well-being and even to flourish. It’s great to see mindfulness approaches increasingly used by the public and taken up in education, work, and other settings. But there is much more to be done. We need to make MBCT for depression more accessible for those who might benefit around the world. And we need to research its use with new groups of people and in new settings.

“At Oxford over the coming years, we’ll continue to develop, test, and extend our approaches, and work to ensure access to therapy for the widest number of people around the world. Our vision is of a world without the devastating effects of depression, where people enjoy mental health and well-being and are resourced to meet the challenges of the next fifty years.”

“Although initially sceptical…having completed the course, and attended every session, I am a convert. It’s just logical that we could all do with simple techniques to help us remember to live in and appreciate the present moment. I’ll be recommending it to all those who work with young people in my constituency.”

UK member of parliament who attended mindfulness classes in Westminster, 2015