The University of Oxford’s iTunes U site goes from strength to strength, making sure that learning has a real impact in society 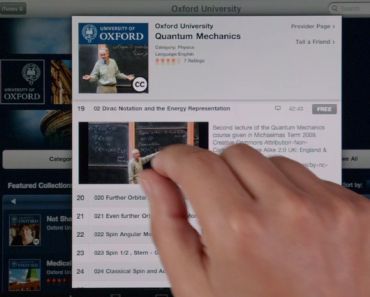 The University of Oxford’s iTunes U site was launched in October 2008 and has had more than 22.5 million downloads so far.

The University of Oxford’s iTunes U site was launched in October 2008 and now, as it approaches its sixth anniversary, it can celebrate a remarkable landmark: more than 22.5 million downloads so far. Given that access to the lectures, teaching materials and interviews with leading academics on iTunes U is completely free, the City of Dreaming Spires is at the forefront of making learning available to as wide an audience as possible, opening its virtual doors to everyone.

The Open Spires project had its roots in 2008 when the university entered into a partnership with Apple, which had developed a simple mechanism at Duke University in the United States to push content onto students’ iPods. The marriage of Apple and Oxford’s academics was fruitful at once, giving students, staff and the public any-time access to lectures. By 2010, some 60% of freshers revealed that they had viewed material via what became known as ‘the University of iPod’ before beginning their degrees.

Today, the statistics speak for themselves. Over 6,400 podcast items have been processed via iTunes U. The site has a worldwide audience of 185 countries, with 31% of users from the USA, 17% from the UK and 7% from China. It boasts over 5,500 hours of material from 4,000 academic speakers and contributors.

The sheer variety of content available on iTunes U is one reason for its success. Viewers can experience a typical Oxford Humanities tutorial, they can enter the complex worlds of chemistry and physics, they can enjoy the wit of Oscar Wilde and they can find out about Alumni events. They can also discover how to write the perfect business plan, ponder challenges to the Western canon and get to grips with Shakespeare thanks to a unique lecture series, with each talk covering one play and including an eBook. Whatever they download, users will find high quality and accessible learning materials.

As Peter Robinson, manager of Oxford on iTunes U, says: “We had a feeling we were onto something when we set up iTunes U but its success has been very rewarding. We’ve now formalised the methods of acquiring and publishing content, around 55% of which is openly licensed under Creative Commons so that it can be reused in education worldwide. It is fantastic to see Oxford playing a leading role in such a cutting edge and altruistic education programme, and to see researchers’ work reach such wide audiences.”

The University offers and encourages other learning institutions to use the materials in their own teaching. Other universities, colleges and schools can now use the online lectures in their own lessons at no cost. The material can be downloaded from iTunes or the parallel University web site.

Related websites
Oxford on iTunes U
Podcasts from Oxford University

‘As head of More Able and Talented at a large state school, I am constantly looking for resources to improve our teaching and your podcasts are giving us just that opportunity.’