An integrated method of tracking small seabirds pioneered by University of Oxford zoologists is providing valuable information about both the health of the oceans and how best to protect vulnerable species. 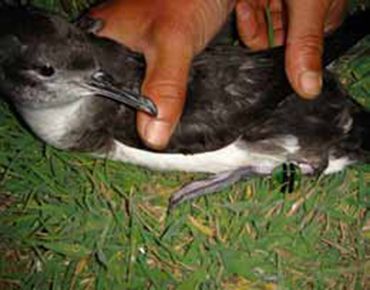 A Manx Shearwaters being fitted with a GPS logger.

The world’s oceans are under pressure from fishing, pollution and climate change, and creatures that depend on the sea are most likely to feel the impact. Studying the behaviour of sea-going birds like the Manx Shearwater can tell us much about the state of our oceans, as well as how to protect species which are vulnerable to changes in ocean health. But how do you study the habits of a bird that comes to land only briefly to breed, and migrates between the North and South Atlantic – a round trip of 25,000 kilometres every year?

Professor Tim Guilford and his OxNav team in the Department of Zoology have pioneered methods that are generating completely new information about what Manx Shearwaters are doing on their long sea journeys. Tiny electronic devices can now be fitted to birds’ legs or backs to record data such as position, speed, or depth, and this is revolutionising the study of animal migration. What the Oxford team have done is develop analytical methods for combining different data, allowing them to determine when and where birds are flying, resting on the water or, crucially, foraging, even in the remotest spots of the open ocean. No one has previously gathered such intensive information about seabird behaviour, and it is changing the evidence base on which decisions about marine protection for seabirds are made.

The Manx Shearwater depends on a very small number of breeding sites in the North Atlantic, with the most important colonies concentrated around the Irish Sea. Professor Guilford’s sophisticated tracking data have revealed for the first time that shearwaters from all the British colonies forage in the same section of the Irish Sea, making it a vital area for protection.

Research data have also identified foraging ‘hotspots’ off the Welsh coast, helping organisations such as the Wildlife Trust of South and West Wales involved in the consultation process to assess objectively whether proposed marine ‘Special Protection Areas’ will be best placed to do their job effectively. Such data are now also being used to help shape proposals by Birdlife International for marine protected areas much further afield in the mid North Atlantic, where tracking reveals important areas for birds.

Tracking Manx Shearwaters during their entire life cycle, rather than just in one specific location, gives important new information about the species. But the data gathered on this and other species such as the now endangered Atlantic puffin can also help to provide a barometer for ocean health on a global scale – and ultimately that could benefit marine life as a whole.

‘We rely heavily on the expertise and research of the OxNav group and their Manx Shearwater research to inform our responses to consultations and our work with Welsh and UK government for the benefit of the species. Their work allows us to make informed rather than simply precautionary recommendations, which greatly increases our chances of securing positive change. It has allowed us to look in a more informed way at the most appropriate marine areas for protection, and the risks posed by emerging anthropogenic issues such as lighting at sea from shipping, or offshore renewables.’

Lizzie Wilberforce, Conservation manager for the Wildlife Trust of South and West Wales