A new vaccine, developed and evaluated in conjunction with Oxford scientists, has proved effective against typhoid, and is influencing global policy on vaccination. 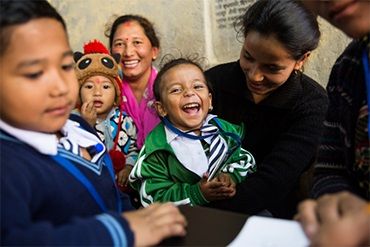 Typhoid has been virtually eliminated in industrialised nations but still affects 9 million people in low-income countries each year, most of them children, causing more than 90,000 deaths[i].

‘The disease, which is spread through contaminated food and water, is commonly resistant to antibiotics and is increasingly difficult to treat,’ explains Andrew Pollard of Oxford University’s Paediatrics Department. ‘Improvements in sewage and waste management can prevent infection but resource-constrained countries often struggle to make such investments and progress is slow.’

This prompted Pollard and his team at the Oxford Vaccine Group (OVG) to begin to explore the potential of vaccination to prevent the disease. In 2011 OVG developed an innovative human infection model in which 112 volunteers received either a new or control vaccine and were then deliberately infected with typhoid. Initial studies showed that the vaccine was safe and effective in reducing disease rates by 54-87% and such ‘human challenge’ trials are now increasingly used to speed up the development of new vaccines.

Understanding the ‘burden’ of a particular disease in any country is essential to help make decisions about which vaccines to prioritise. The Oxford team, in conjunction with the University of Maryland and funded by the Wellcome Trust, therefore led studies in Nepal, Bangladesh, and Malawi to establish the prevalence of the disease, revealing alarmingly high rates of typhoid in children.

The initial studies then formed the basis of large field trials, funded by the Bill and Melinda Gates Foundation, which firmly established both the safety and effectiveness of the vaccine. Evidence from the human challenge studies was also presented to the World Health Organisation’s Strategic Advisory Group of Experts and informed their recommendation that the vaccine should be given to all children from 9-months to 15-years in areas with high incidence of the disease. The Global Alliance for Vaccines and Immunisation subsequently allocated US$85m in funding to help low-income countries introduce the vaccine.

More than 100,000 children have now been vaccinated in South Asia through the trials which started in 2017. Ten million doses were deployed at the end of 2019 to control an outbreak of antibiotic-resistant Typhoid in Pakistan. And global roll-out of the vaccine has now started, with Zimbabwe and Liberia already approved for national vaccination programmes and several other countries planning their programmes.

Research on the vaccine development has brought international recognition to OVG and been reported in high-impact publications such as Nature Med, The Lancet, and the New England Journal. The research has also attracted further funding to study paratyphoid and explore the long-term protection offered by the vaccine.

‘The vaccine has huge potential to reduce the burden of typhoid in low-income countries, prevent deaths, and promote health equality between rich and poor nations,’ says Pollard. ‘It’s fantastic that vaccination is now a recognised global health policy and that funding has been committed to ensure its roll-out.’

Andrew Pollard is Professor of Paediatric Infection and Immunity in the Department of Paediatrics (Medical Science Division), and leads the Oxford Vaccine Group

'Not only could this vaccine save lives, it could also prove to be a valuable weapon in the fight against antimicrobial resistance.'