Pioneering research between the University of Oxford and Rothamsted Research has led to the development of a new compound that could transform crop yields of all kinds. 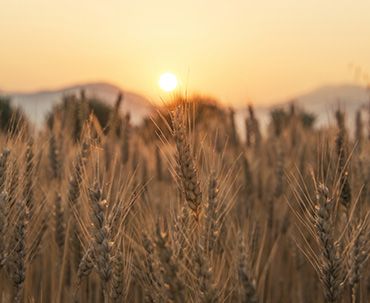 A wheat field.
Population growth and climate change are placing an enormous strain on global food security. To meet increasing demand, global crop yields need to double in the next 35 years. However, current methods such as selective plant breeding and genetic modification are not improving crop yields at anything like the rate required to avoid future food shortages.

Now researchers at the University of Oxford and Rothamsted Research have developed a solution. Through years of collaborative research, Professor Ben Davis (Oxford) and Dr Matthew Paul (Rothamsted) have developed a novel chemical yield enhancer, based on a natural signalling sugar called T6P that is present in all plants. This currently represents the only method for increasing crop yield that can keep up with the level of increasing demand. The T6P molecule increases the rate of photosynthesis and prompts the plant to produce more starch. T6P can be applied to a number of key food crops including wheat and rice.

Naturally-occurring T6P does not cross cell membranes, but the researchers have made precursors of T6P that are membrane-permeable and release T6P into the plant in the presence of sunlight.  The method involves treating crops with a low-cost foliar spray. A trial conducted on wheat in 2016 showed increased grain size and yield per plant by up to 20%. In addition, T6P has been shown to increase plants’ resilience to stresses such as drought and flood – an important impact in areas of the world where crop loss due to these stresses is common.

Publication of these impressive results in Nature in 2016 attracted interest from several commercial companies, and the innovation is now the focus of a new spin-out company called SugaROx to exploit the intellectual property described in three patents. Next steps include scaling up production of the compounds, carrying out large-scale field trials in a range of crops, and undergoing toxicity testing in order to gain regulatory approval. The academics have already raised significant grant funding to support field trials around the world. There are currently no similar products on the market. SugaROx plans to explore a philanthropic business model to allow its novel product to reach developing countries where it is most needed. SugaROx is now seeking investment.

The approach developed by Professor Davis and Dr Paul not only has the potential to be commercially successful, but also to revolutionise farming by dramatically increasing food crop production in some of the world’s poorest countries in the world.

'We’ve shown that it is possible to influence how plants use the fuel they produce for agricultural benefit, both in terms of yield and also resilience to drier conditions. The next stage of work is to replicate this experiment as much as possible in the field in different environments, for which we'll need to understand how to scale up production of the T6P precursor and determine the effect that more variable conditions may have on results.'