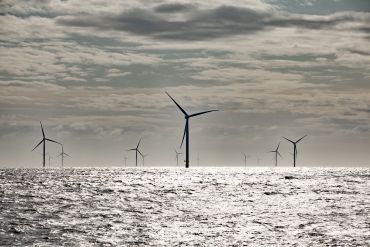 Hornsea One - Offshore WInd Farm. Photo Credit: Ørsted
Offshore wind could provide almost “limitless clean energy,” according to Professor Byron Byrne of Oxford University’s Department of Engineering Science. “The UK is surrounded by sea, where the winds are high and reasonably consistent, so the potential is huge. By increasing the amount of electricity produced by wind power we will reduce our dependence on fossil fuels, cut carbon emissions, and have greater security of supply.”

A current eight-megawatt offshore wind turbine, with a rotor diameter of 170 metres, displaces approximately 12,000 tonnes of CO2 a year from fossil fuel generation and provides electricity to power more than 7,000 homes. These turbines are clustered into farms of 100 or 200 structures, so that they make a meaningful contribution to the UK’s electricity supply. Next generation turbines will be 15 megawatts or more.

New engineering calculations developed by Byrne and colleagues, in collaboration with industry partners and researchers at Imperial College London and University College Dublin, are helping to cut the cost of offshore wind, scale up the size of the wind turbines, and increase confidence in the industry.

The Pile Soil Analysis (PISA) research project, a joint industry project funded through the Carbon Trust Offshore Wind Accelerator and running from 2013-18, has successfully improved the engineering design of offshore wind turbine structures. New methods have been developed to fully optimise the ‘monopile’ foundations, central to the function and stability of turbines – reducing the amount of steel in the foundation by around 30% and extending the sites in which the foundations can be used.

“Monopiles are substantial structures – currently around ten metres in diameter and embedded more than 30 metres into the seafloor,” explains Byrne. “Previously their design was based on methods developed by the offshore oil and gas industry; but the significant differences between a farm of offshore wind turbines and a typical oil and gas platform meant that the traditional techniques do not translate very well.”

An extensive process of site testing was central to building industry confidence and encouraging early adoption of the design methods. “We tested the approach at different sites with soil types similar to those found in the North Sea – including a clay in the UK and a dense sand in France – predicting our results and then verifying them through subsequent field testing,” says Byrne.

“Sharing information with our industry partners (11 of Europe’s main offshore wind developers) throughout the research process also helped to build their confidence that our models were as safe and effective as long-established industry design standards.”

The potential impact of the work could be very significant. Use of the new technology has already resulted in direct savings: engineering consultancy Atkins calculated that the technology had significantly reduced the size and depth of embedment of monopiles at one North Sea windfarm compared to traditional design approaches. Ørsted optimised 50% of the foundations at Hornsea 1, previously the world’s largest operating wind farm, and all of the foundations at Hornsea 2, now the world’s largest operating wind farm. The technology has also enabled monopiles, a simple design with a well-established supply chain, to be applied to many more sites than had previously been considered.

“The long-term impact of the work, and the move to scale-up off-shore wind in general, could be transformative,” continues Byrne. “The new technology means industry can use much larger turbines and can more rapidly scale-up design and installation of new sites. The cost of new offshore wind has already dropped dramatically since 2015, being cheaper than nuclear and new gas, with the goal of subsidy free wind power now in sight.”

“The new techniques, and other industry developments, mean the UK can confidently aim to meet the government ambition for 95% of British electricity being low carbon by 2030 – this would be a huge contribution to tackling climate change.”

Funders: Department for Energy and Climate Change, PISA industry partners under the umbrella of the Carbon Trust’s Offshore Wind Accelerator.

“The PISA project has been a highly successful case of close industry-academia collaboration and has led to significant improvements in design methodologies of offshore windfarm foundations.”