David Johnson from the Department of Education has developed the first National Literacy Assessments for Sudan and worked with the government and other partners on measures to boost children’s literacy. 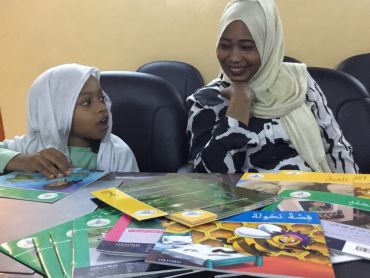 Oxford Readers, child and teacher
The ability to read and write underpins all other learning and is often linked to economic prosperity and better health – both at an individual and country level.

Sadly, from available evidence, literacy levels in some developing countries appear to be extremely low. Many children do not have access to education and for those in school, the quality of teaching and learning is often poor.

There are few nationally representative studies on children’s reading in developing countries and in large countries, such as Sudan, not knowing where the quality of learning is weakest, constrains equitable educational reform.

Educational Psychologist, David Johnson, was commissioned to work with the government of Sudan to design the first ever National Learning Assessment (NLA) to get an accurate picture of learning achievements across the country. The Assessment, supported by the World Bank and Global Partnership for Education, was rolled out across the country’s 18 states in 2015.

“Sudan already had regular, if rudimentary, classroom tests conducted by teachers - in part to allow students to move from one class to the next,” explains Johnson. “But the NLA was fundamentally different in that it produced national data on literacy levels for the first time and helped identify weaknesses in the teaching of reading.”

“Reading a short text at a reasonable speed and with accuracy, is vital to comprehension,” he continues. “While there’s no agreed standard, it’s thought that a reading rate of forty to forty-five words per minute is needed to comprehend a text; but we found a national oral reading fluency rate of 14.31 words per minute. Unsurprisingly, the number of questions that learners were able to answer about the meaning of the text was very low.”

That children in Sudan read at a much slower rate than their peers in other countries in the Middle East and North Africa is significant. But perhaps the most profound finding of the study was that over 40% of the national sample were unable to read a single word; and that learning achievement was grossly skewed within the country with 71% of non-readers found in Central Darfur compared to 16% in the Northern State and 20% in the capital, Khartoum.

The NLA was transformative in that it gave government ministers and officials evidence of the scale and nature of the literacy problem, allowing them to work with funders and curriculum experts to design appropriate interventions. Johnson comments: “The Minister of Education was surprised and disappointed by the results, particularly the disparities in learning between the 18 States, but was extremely keen to improve standards nationally.”

A key determinant of the reading crisis was the lack of appropriate reading materials and time set aside for reading with basic support (such as a teacher in school and an adult at home listening to a child read). One key change therefore, introduced by the Federal Minister under the Basic Reform of Education Project (BERP), funded by the World Bank and Global Partnership for Education, was the allocation of grants to 6,000 of the worst performing schools. The grants funded school facilities and equipment, as well as graded supplementary readers and initiatives to engage parents to support children’s reading at home.

Johnson repeated the NLA in 2018 and found that the national percentage of those unable to read dropped from 40% to 39%, and from 47% to 42% in the worst performing (grant receiving) schools. For Johnson, however, the most significant impact of the work is that there is now a network of teachers across Sudan who better understand learning and the notion of ‘progression’ and can use simple assessment measures to identify those pupils most in need of help and measure their progress.

“We trained thousands of teachers across the country in the assessment methods,” comments Johnson. “This support helped them to become teachers with a real awareness of learning, which I think is the most important outcome of the project.”
“It’s often said that children who don’t learn to read, cannot later read to learn, illustrating the importance of literacy to development.” says Johnson. “And education itself is so important to economic and social development in our complex, globalised world – so it’s great that Sudan has invested in supplementary reading materials to boost reading.”

“The COVID pandemic and recent conflict have disrupted plans but as soon as its possible, I’ll be going back to Sudan to support the third NLA – which we hope will reveal continued progress.”

“David Johnson trained a team in Sudan which will help the federal ministry to build National Literacy Assessment (NLA) structures in all 18 states in order reduce the disparities among them in the quality of education. The NLA is a starting point and must not be the last in our journey of quality of education.”