The Quill project, developed by Oxford historian Dr Nicholas Cole and colleagues, is enabling new insights into the study of some of the key negotiated texts of the modern world. 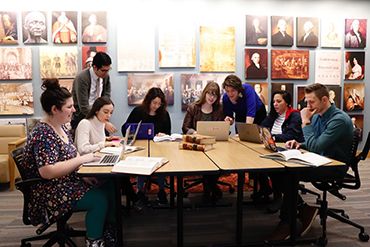 The US Constitution consists of only 5000 words, yet was the product of more than 2500 individual proposals and decisions. The Quill platform focuses on the evolution of such constitutional texts through negotiation, helping both scholars and non-expert users to better understand the process by which they came about, and sometimes challenging traditional assumptions.

Using a study of parliamentary manuals and an adaptation of algorithms developed to support multi‐user text editing, Dr Cole has developed a digital platform that recreates the context and timeline of negotiations, and provides interactive visualisations, statistical analysis and search tools. Users are able to engage closely with primary source material, and there are facilities to add comments and record analysis.

Dr Cole explains: “For historians, the database enables a richer understanding of how the text changed during negotiation – who influenced it, at what stage, and what impact this had on the final agreement. For legal and other scholars, it may help them better understand what the writers intended to say, and how the text should be interpreted in today’s contexts.”

To date, Quill has published models of the negotiations that produced the 1787 Federal Constitution, the 1789 Federal Bill of Rights, and the 1895 Utah State Constitution. Projects currently under development include the creation of the XIII-XVth Amendments to the US Constitution, as well as projects examining the development of other US state constituions, Brexit, and comparative constitutional development internationally.

In developing the Quill project, Dr Cole has created an environment in which undergraduate students are able to collaborate with each other and academic mentors on substantive research questions and the production of the digital edition. These opportunities have been particularly successful in engaging students from non-traditional backgrounds, most notably through a partnership with the Center for Constitutional Studies at Utah Valley University (UVU), an open-enrolment university in Provo, Utah.

Dr Cole says: “Using Quill, the students were able to pursue genuine and useful historical research and I am very proud that we were able to partner with them. Now the State Senate is interested in their work and is training its clerks to use the database. The Utah project also directly influenced my own research as it highlighted the importance of studying state-level constitutions which to date have received little attention from scholars.”

The success of the collaboration between UVU and Quill was recognised in January 2020 with the award of a prestigious National Endowment for the Humanities Digital Advancement grant which will expand the project to three further state constitutions. In the words of UVU President Astrid Tuminez, it will be an opportunity to allow more UVU students to “learn and shine” through a “truly groundbreaking” project.

Dr Cole finishes: “The Quill project has been extremely fruitful. It has allowed us to deepen understanding of constitutional government, to focus attention on neglected aspects of American state-level governance, and to build unique academic partnerships with institutions that are very different from Oxford. I am excited to see where we can take the project next.”

Dr Nicholas Cole is a political historian specialising in post-independence America and a Senior Research Fellow at Pembroke College, Oxford

“I am immensely proud of our student’s contribution to this amazing and historic project, which provides a significant learning tool to everyday students as well as scholars looking to delve more deeply into negotiated texts. We have been honoured to work with such an esteemed institution as Pembroke College in bringing this platform to the public.”