Researchers from the Faculty of Music have catalogued the work of British composer, Frederick Delius, and engaged with audiences to increase knowledge and understanding of his music and the process of composition. 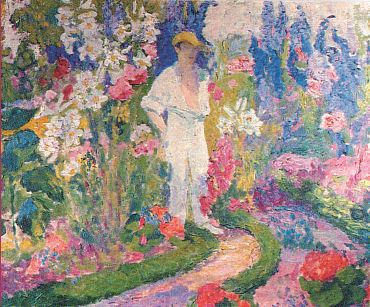 Painting of Frederick Delius in the garden of his home at Grez sur Loing, France. Credit: Harrison Sisters Trust
Frederick Delius (1862-1934) is often thought of as a quintessentially English composer of evocative but unstructured pastoral pieces, and somewhat underrated in comparison to historically contemporary figures such as Mahler or Sibelius.

But the Digital Delius project, in collaboration with the British Library and Royal Library Denmark, emphasised the international nature of his experience and its presence in his music.

“Our research on Delius has fundamentally changed our understanding of his life and works,” comments researcher Joanna Bullivant. “Often known for ‘English’ works such as Brigg Fair and In a Summer Garden, we now appreciate how his travels to Florida and Scandinavia, and long residence in France, encouraged him to incorporate other musical traditions in his work including African American music, and to reflect contemporary events such as the First World War. It’s important to acknowledge this and recognise both his influences and internationalism, which challenge and deepen our ideas of British national culture.”

Bullivant’s cataloguing of his works also revealed more about the process by which his work was developed and interpreted over the years.

“People often think of musical composition as coming fully formed into a musician’s head and being transferred ‘verbatim’ to manuscript,” explains Bullivant. “My work on the Delius catalogue shows how the composer changed and developed works over time. Crucially, it also revealed how conductor Sir Thomas Beecham’s interpretative comments to the orchestra have been incorporated into later published manuscripts, fundamentally changing the original scores.”

Bullivant and colleagues have subsequently engaged with a variety of audiences to explore the process of musical composition and perform some of the pieces as Delius had envisioned them.

The Discovering Music online resource, featuring an array of Delius content alongside manuscripts of other composers such as Elgar, Britten, and Schoenberg, was developed with the British Library. It used digitised manuscripts, photographs, letters, concert programmes, recordings and published scores – alongside expert interpretation – to allow visitors and online users to explore the process of composition, and better understand the relationships between working notes, manuscripts variants, and recordings.

The resource has reached a wide audience including non-specialists, music enthusiasts, and students from primary to post-graduate level – and was widely shared through events, articles, and media appearances. Discovering Music has subsequently expanded to feature the British Library’s Beethoven collections in celebration of his 250th anniversary in 2020, and new content on Elgar curated by Bullivant.

Alongside this work, digital experts Dr Kevin Page and David Lewis used the innovative MELD (Music Encoding and Linked Data) software to make a prototype interactive music article about Delius, which enables the reader to view items in different media together so they can really see the musical techniques and effects described by musicologists. The team aim to expand this research to make music manuscripts and historic collections more accessible to all in future work.

Grimley’s edition of the original version of Delius’s String Quartet (1916) received its first performance in 99 years with the Villiers Quartet in 2015. He subsequently worked with the Villiers on the premiere of two newly discovered movements from an earlier Quartet (1888), and with pianist Edward Rushton on the world premiere recording of six newly discovered piano pieces.

Grimley and Bullivant also worked with music students on events which helped them to understand the process of composition and develop their own musical practice. An open rehearsal with the Oxfordshire County Youth Orchestra in 2018 helped students get a better picture of how Delius had composed and the subtlety of his interpretation, which may have been missed in an earlier performance tradition heavily influenced by Beecham.

“It has been a pleasure to help audiences from young musicians to visitors to the British Library, to better understand Delius’s work and, through this, the process of composing,” say Bullivant. “Understanding that developing music from scratch involves work and effort as well as creativity, and that pieces change over time, is so important for allowing people to really connect to music and the very human process of creating it!”

“Digital Delius played a crucial role in enabling the British Library to create its new online learning resource Discovering Music… [which] has exceeded our expectations.”

“Collaborating with [Grimley and Bullivant] was one of the most valuable things we have ever experienced as a string quartet… the information uncovered by [them] has entered our collective DNA as a quartet.”

“The impact of this collaboration was wide and meaningful… the orchestra not only sounded better after this workshop, they also attained broader learning outcomes.”