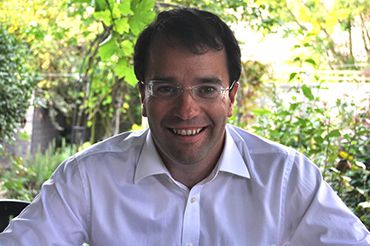 Professor Paul Newman
From 2005 to 2017 Paul Newman led the Oxford Mobile Robotics Group (MRG) within the Dept. of Engineering Science. In 2017 MRG became the Oxford Robotics Institute. During this time he led the development of a suite of technology that enabled autonomous vehicles to navigate with zero dependence on infrastructure at scale. It is a foundation technology.

The Oxford Driverless Car program is perhaps the most visible and well known output of this. Working with BAE and then Nissan as part of an EPSRC Leadership Fellowship and then a Programme Grant, Newman laid the foundations for the UK’s driverless car initiative which is now a high profile strategic mission for the nation and was mentioned in the Queen’s speech. The UK’s code of practice for autonomous vehicles is based on the Oxford Safety Case developed at Begbroke and trialled with the Department for Transport.

In 2015 Newman and his colleague Ingmar Posner spun out Oxbotica to commercialise this and related technology – the goal being to revolutionise what everyday vehicles can do for society. The technology developed by Oxbotica, which has its heritage in the labs of the University, is applicable to all vehicle domains. For example in late 2017 on one single day, Oxbotica was running autonomous vehicles in Heathrow (planeside), a mine in Australia, a port in Singapore, 3 road-vehicles in the UK Midlands, a warehouse in Vienna and a Campus in Pasadena.

Such is the strength of Oxbotica, that it has traded since day one and the University remains a major share holder and quite rightly, the recipient of nearly 500k of licensing revenue.