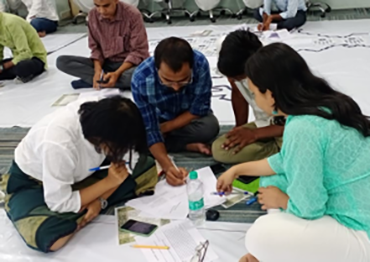 Community Consultation on the Constitution at Jamdoli, Jaipur (Rajasthan)
A project lead by Professor Tarun Khaitan of Oxford University Law Faculty, is making research on the Indian Constitution available to wider audiences by translating key constitutional ideas into Hindi and sharing these through social and traditional media and other forms of engagement.

‘India saw widespread street protests in late 2019 over proposals to extend fast-tracked citizenship to refugees from neighbouring countries belonging to all major South Asian religions, except Islam,’ explains Professor Khaitan. ‘A public, mass recitation of the Preamble of India’s secular Constitution become a key expression of dissent in these protests. Now grassroots protestors are increasingly evoking the liberal, democratic, secular Constitution to make their case in support of a wide variety of causes.’

Khaitan continues: ‘Unsurprisingly, there is a public appetite to better understand the Constitution, but most constitutional research is written in complex technical language, is only available in English, and can only be found through academic channels. We wanted to ensure that at least the key themes and debates in Indian constitutionalism were available to non-English speaking audiences and could be understood and used by all those interested in the Constitution.’

Initially Prof Khaitan developed four explainer videos on the Constitution’s preamble, which were published in January 2020 on The Wire website. The popularity of this venture encouraged him to team up with Ms Surbhi Karwa and Mr Rajesh Ranjan to develop a course on Indian constitutional law in Hindi. Each module was accompanied by discussion lead by Prof Khaitan and included links to further material. A book based on the interviews and discussions explores the Indian Constitution’s limitations and failings alongside its successes and ambitions and is now being produced in Hindi.

The course discussed justice, liberty, the separation of powers, federalism, democracy, and the rule of law in non-technical language. And the material was disseminated through channels available to the public such as YouTube, Spotify, and mainstream media. ‘We expect the material will be of interest to journalists, students, grassroots groups, and even lawyers operating in Hindi, particularly those in small towns and villages without access to academic sources,’ says Khaitan.

A process of wider engagement has helped further disseminate the material. Course modules have been used in reading circles, legal awareness camps, and college teaching programmes outside the big cities. Rajesh Ranjan has also started an organisation of young law students translating constitutional scholarship into Indian vernacular languages and running workshops on the constitution in rural Rajasthan.

‘The Constitution has become the sole repository of moral standards in India today and it is encouraging to see that it is increasingly being used by civil society to hold the government to account. We hope that making our legal research available to wider audiences will be a contribution to strengthening constitutional governance in the world’s largest democracy.’

Professor Tarun Khaitan is Professor of Public Law and Legal Theory, and Head of Research in the Bonavero Institute of Human Rights
Karwa Surbhi is PhD candidate at the School of Global and Public Law at UNSW Sydney
Ranjan Rajesh is an undergraduate student at National Law University, Jodhpur, India

‘We did not know anything about the Constitution… I did not know it guarantees the rights to food, to life, to free movement. The team explained how important these rights are and how to safeguard them. I am not very educated, but after learning that the Constitution promises the right to education, to vote, and to marry according to one’s own choice, I am trying to inculcate these values in my children.’

Aruna Lilawat, a dalit villager who was married off as a child, Surpura Village workshop, organised by team Constitution Connect, 8 March 2022

‘I was somewhat familiar with the concept of the Rule of Law through my civics curriculum, but its simple explanation through the story of the ‘Red Queen’ in Alice in Wonderland – who punishes first and convicts later – made it accessible. These issues matter in everyday life, so a basic understanding of the Constitution… is very important.’