A new digital archive is helping to balance the narrative about Portugal’s colonial empire, and its key role in the creating and perpetuating the slave trade. 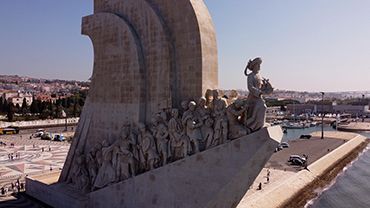 Monument of the Discoveries
A digital archive created by historians at the University of Oxford in partnership with the European Association of History Educators (EuroClio) is helping to reinterpret key sites and monuments associated with the Portuguese Atlantic slave trade.

Monuments such as the statues of Prince Henry ‘the Navigator’, who backed early navigations to find new lands, and the areas where Africans brought across the Atlantic were traded as slaves, can be found across Portugal. But there are growing calls for these sites to be contextualised to better reflect Portugal’s role in the Atlantic slave trade.

“The dominant narrative around Portuguese colonisation is one of the ‘discovery’ of new lands furthering ‘knowledge’ and ‘science’. And there is often an assumption that the Portuguese were less brutal to the peoples they conquered than other European nations,” says Giuseppe Marcocci.

“In fact, whilst we often think of slavery as providing labour for plantations in the Americans from the 17th century onwards, the Portuguese started bringing people from Africa to Europe to be traded as slaves in the 15th century; and people of African origin provided significant agricultural and domestic labour in Portugal from the 16th century. Our digital archive brings together a range of resources relating to 12 sites in the Portuguese cities of Lagos and Lisbon, to help students engage with this less well understood aspect of Portugal’s history.”

The Oxford team worked in partnership on the archive with EuroClio, who already had experience of engaging students and educators around other contested histories in Europe. A grant from the Knowledge Exchange Seed Fund allowed them to select appropriate sites and plan and develop resources.

Video and audio material was recorded in Portugal by filmmaker Arjuna Keshvani and the Oxford team selected and translated original historical source material, much of it previously unpublished, to accompany the interviews. All material is available in both English and its original language (mostly Portuguese) as the issues have relevance beyond Portugal. The archive is hosted on the user-friendly ‘Cargo’ platform to facilitate its use in schools.

“In developing the video and audio material, it was important for us to record the responses of a network of grassroots participants from the tourism and cultural sectors rather than focusing on the academic research about them,’ says Giuseppe Marcocci. “Our collaborators were also able to connect us to current debates in Portugal about the marginalisation of African communities, and the country’s failure to recognise the scale, brutality, and impact of its former empire.”

“For my part it helped me to appreciate the importance of other perspectives in historical interpretation. And, crucially, how historical scholarship can seem to normalise things such as the slave trade, blunting individual and collective suffering because the institution of slavery was widespread at the time.”

Giuseppe Marcocci adds: “The digital archive is now live, and we hope to add more resources and feature additional sites over the coming months. And we hope that it has an impact on the attention paid to the legacy of slavery and colonialism in school teaching, policy making, and cultural engagement – encouraging more sensitive responses to debates on history, equality, and community identity around contested historical sites.”

“In our work on Contested Histories around the globe [it] is striking that there is virtually no recognition of the heritage of slavery in a country that brought nearly 50 percent of the enslaved men, women and children from Africa to the New World – namely Portugal. We believe that this project will be an important resource for educators, policy makers and others interested in the history of the Transatlantic Slave Trade.”