Researchers at the School of Archaeology have helped to illuminate issues in later prehistory through public engagement. 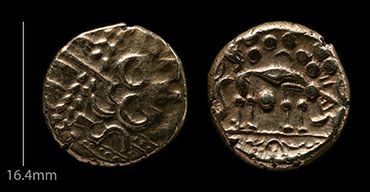 Iron Age coinage in Britain.
‘Archaeology is not just about studying life in the past, such as in the Bronze or the Iron Ages,’ explains Courtney Nimura. ‘It can also be hugely important in helping us approach modern challenges or understand current ways of living, so its important that its made accessible to as wide an audience as possible.’

Researchers from the School of Archaeology have helped illuminate later prehistory through two public engagement projects focused on ‘coins’ and ‘rivers’, sharing their research with audiences across England.

The More than Money project focused on Iron Age coinage in Britain, building on the department’s digitisation of the Celtic Coin Index, which holds information about 68,000 coins. The activities included a gallery display, in-person events, and a legacy of resources and learning materials, particularly aimed at pupils at Key Stage 2 (age 7-11) as prehistory is included in the National Curriculum.

‘The introduction of coins was a major innovation in the Iron Age,’ says Nimura. ‘Teaching in schools tends to emphasise their role as currency, but in a society where there was no writing, they tell as us a great deal about identity, belief, and power – as well as potential links with the Roman Empire. We wanted to give young people the opportunity to explore these aspects of ancient coinage in our activities and enhance their understanding of the complexity of Iron Age societies.’

In a different project, The Ripple Effect built on research from the Ebb & Flow project which seeks to understand the many pivotal roles rivers played in later prehistoric societies, how prehistoric communities used rivers, and how rivers shaped and influenced life in the past.

The project developed during the COVID pandemic and was purposefully created to engage with people who would now be spending more time outside. It utilised existing public noticeboards near archaeological sites around England, including rivers and paleochannels (rivers that are now lost), to share factsheets about prehistoric rivers and host original watercolour paintings by Artist-in-Residence, Miranda Creswell. An online exhibition reached users further afield and enabled access for those unable to leave home.

‘Archaeology helps us to understand the present in many ways. Studying rivers in prehistory, for example, provides insight into how climate change impacts the environment and the people living around them, while studying coins can teach us how societies – including our own – express power and beliefs,’ says Nimura.

‘We were delighted with the audience reaction to our activities, which illustrates that one of the most important roles of archaeology is to stimulate curiosity and change the ways we think about the past. Feedback from activities showed that people of all ages engaged with our resources, enjoyed exploring these aspects of prehistory, and in many cases went on to share their experiences, learn more, or develop activities of their own. A legacy of resources and learning materials, including kits of replica artefacts, will ensure that our research will continue to reach new audiences over the coming years.’

‘The Ripple Effect was a keystone in the Trust’s 2021 programme of activities to engage Dulverton visitors and residents in the research into the archaeology of Dulverton’s medieval urban watermill system. It generated considerable public and media interest, reached around 3000 visitors, and was an important factor in other artists and archaeologists deciding to join the Trust’s Art and Archaeology initiative.’

‘It was exciting to put original and contemporary artwork next to recent research,
within public spaces. Rivers and riverine landscapes have not always been thought of as classic archaeological sites, but by putting these culture hubs in the middle of these spaces, the researcher and artist hoped to reveal their fascination for rivers through their work.’