What can the writings of thirteenth-century female mystics teach us about love and spirituality in contemporary life? More than you might think, according to Complete Surrender, a short film produced by Oxford University’s Dr Louise Nelstrop and filmmaker Pol Herrmann. 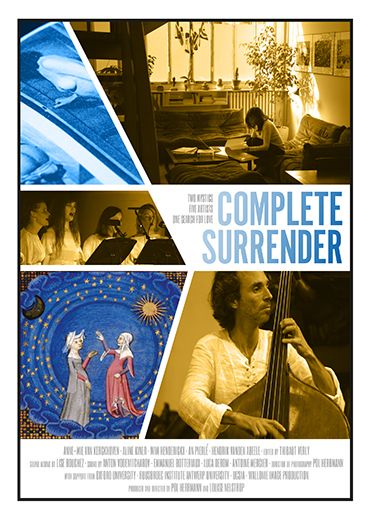 Complete Surrender explores why, and in what ways, five established artists took inspiration from two female medieval mystics – Hadewijch and Marguerite Porete – to investigate the question of ‘What is Love’. The artists include musicians, a writer, and a fine artist and their outputs feature artwork, music, performance and text.

The five artists featured are: fine artist Anne-Mie Van Kerckhoven; composer Wim Henderickx; author Aline Kiner; singer-songwriter An Pierlé; and musician and composer Hendrik Vanden Abeele. Each had explored the writings of Hadewijch and Porete through their own medium – and shared their work and reflections with Nelstrop and Herrmann during filming in 2019.

‘There’s been a surge of interest in the writings of medieval female mystics from the Low Countries in the last decades,’ explains Dr Nelstrop. ‘French and Belgian speaking artists are looking to engage around the contribution of these two extraordinary women, who challenged the norms of society and were willing to die for their beliefs. The film set out to ask the question, “What is love?” building on the experience of Hadewijch and Marguerite. The artists’ conclusion was, “complete surrender” – hence the title of the film!’

A grant from the KE Seed Fund provided initial funding for the project in 2019 whilst Louise was on sabbatical at the University of Antwerp. ‘The grant helped us access match funding from the Ruusbroec Institute in Antwerp University and St Ignatius University Centre Antwerp,’ she explains. ‘Matt Smart, who administers the Fund, also helped us shape the project and pushed us to develop an artistic documentary film rather than the traditional documentary we had first imagined – which has worked really well.’

‘We’ve been amazed at how people have responded. We were delighted to be awarded “Best Documentary” in the Love Story Film Festival (15 February 2020, London). And audiences have told us that it’s made a profound impact on them –prompting them to think differently about the relationship between spirituality and sexuality and their own relationship to both.’

The process has also affected Louise’s own research: ‘Having the privilege of working with, and listening to, the artists involved in this project has given me a new appetite to ‘listen’ – to texts, to their artistic interpreters, and to audiences. By truly listening to each other in this project, we have all heard afresh these two medieval discourses of desire.’

Dr Louise Nelstrop is a College Lecturer in Theology at St Benet’s Hall and member of the Faculty of Theology and Religion.

“Originally the size and complexity of Revelations – a complex music theatre piece developed in 2017 – made it difficult to perform in regular concert venues. In 2020 we produced a reduced concert version integrating footage from Complete Surrender which had explored the ideas and staging of the original piece. This worked well and greatly enhanced the experience of listeners and spectators.”

Quote from: (Kevin Voets, Director of the HERMESensemble, who produced Revelations composed by Wim Henderickx)

“The film was screened before Revelations on two occasions. The impact on the audience was really great and the film, as it were, melted into the performance. This concept certainly put me to thinking regarding future work.”

Quote from: (Wim Henderickx, composer of Revelations, which features in the film Complete Surrender)