A desktop microscope manufactured by Oxford Nanoimaging, a spin-out from Oxford’s Department of Physics, can view individual molecules performing chemical reactions in real-time – even inside living cells.

Winner of BBSRC Innovator of the Year Award 2019 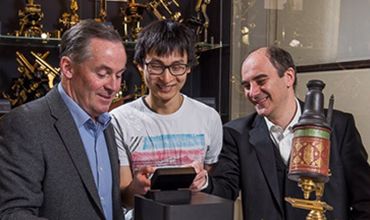 Nanoimager.
Processes such as drug discovery are often hit and miss: researchers may discover a molecule that treats a disease without really knowing how the drug works inside human cells. This makes it harder to learn lessons that could speed up the next big discovery. The arrival of ‘super-resolution’ microscopes that can see molecules interacting within cells could change all that – but currently these are expensive, sensitive pieces of equipment available only to researchers in specialised labs.

With the launch of Oxford Nanoimaging (ONI), Professor Achillefs Kapanidis and his team are set to revolutionise the future of the super-resolution microscope. Until recently, there were no microscopes at all that could view living processes at the molecular level. Conventional light-based microscopes rely on light waves being emitted off a surface – and when the object under the microscope is smaller than the wavelength of light, diffraction (interference) occurs and the object cannot be seen clearly.

In the 2000s, two novel approaches to light-based microscopy managed to break the diffraction limit and to give birth to the era of ‘super-resolution imaging’; these advances won their inventors the 2014 Nobel Prize in Chemistry. But this specialised technology is still beyond the reach of most of those involved in fields such as biotechnology and drug discovery.

Now ONI has created the Nanoimager, a super-resolution microscope about the size of a shoebox – 30 times smaller and significantly cheaper than current alternatives. The microscope, which does not require specialist infrastructure, has been developed by an interdisciplinary team led by Professor Kapanidis and DPhil student Bo Jing.
Using lasers and fluorescence techniques that can make individual molecules light up, the Nanoimager creates striking images which can differentiate objects spaced as close as 20 nanometers, a distance about 200 times smaller than the length of an E. coli bacterium. Since it can watch reactions in real time, the microscope can also help to study how the tiny ‘biological machines’ within cells process biological structures and molecules like DNA. This capability makes it invaluable for screening new drug molecules or developing tiny biosensors that can detect pathogens and identify diseases.

Unusually, ONI has launched as a company with a finished product and orders in place. It uses local workshops for manufacturing, thus stimulating the local economy and bringing investment to Oxford. There is considerable interest from companies involved in next-generation DNA sequencing, and from laboratories which hope to use the Nanoimager to develop new antibiotics. With eight years of research already behind it, the company intends to make its super-resolution microscope accessible across the scientific world.

'The Nanoimager is potentially a ‘game-changer’ as far as analytical instruments are concerned. ..., (it) will fill a space that is currently occupied by systems that are expensive and require specialist training to be accommodated in most academic or clinical laboratories.'