Professor Selina Todd and Dr Andrea Thomson are drawing on their research to develop community theatre with partners in Manchester and Salford, enabling young people and women and men across a wide age range to develop their confidence, performance skills, and historical interest in the region. 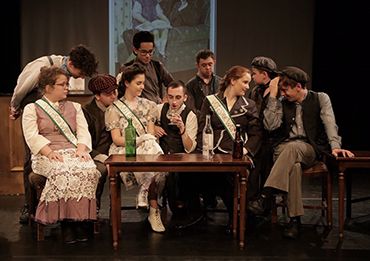 (Credit: Shay Rowan Photography)
Todd’s biography of Shelagh Delaney, the Salford-born author of ground-breaking play A Taste of Honey, was the starting point for exploring the playwright’s further body of work and the economic, social and cultural contexts in which it was created.

Todd saw an opportunity to collaborate with MaD Theatre Company, along with other partners including writer Charlotte Delaney, the Working Class Movement Library and the Guinness Partnership (affordable housing registered provider), as part of an AHRC-funded project to explore Delaney’s work with local communities in Greater Manchester.

MaD describe themselves as ‘aiming to do theatre by and for people who wouldn’t normally go’ and provide interactive drama workshops for young people and adults around Greater Manchester, enabling them to gain performance skills, increase their confidence and self-esteem, and boost their education and employment opportunities.

The AHRC funding enabled MaD to work with the Oxford historians to reach out and engage with local young people and adults to develop and perform the play. The Guinness Partnership, which manages recently refurbished tower block Delaney Heights, named after Shelagh Delaney, provided office space and project support, while Charlotte Delaney (Shelagh’s daughter) adapted the three-part radio play Sweetly Sings the Donkey for the stage.

The play was performed at the Lowry Theatre in October 2017, selling out its two-night run and playing to enthusiastic audiences. As well as enjoying the quality of the production, many people observed that seeing the play would encourage them to look out for similar theatre productions in the future, even though they were not regular theatre-goers.

A second play, funded through AHRC and Oxford University’s John Fell Fund, was created by MaD in 2018, in collaboration with members of the Delaney Theatre Group. Set around 1918, It’s the Wrong Way to Tickle Mary was performed to packed and appreciative audiences at the Lowry Theatre, the Met Theatre (Bury), Rochdale Literature & Ideas Festival, and Salford Arts Theatre.

The play (whose title is a reference to a popular take on contemporary song It’s a Long Way to Tipperary) looks at the war through the lens of class, gender and the experience of women, offering participants and audiences new insights into this period. In particular, it explores how women’s wartime experiences contributed to subsequent suffrage campaigns and considers whether life has changed for the better for working-class communities in Greater Manchester in 2019.

Professor Todd comments: ‘Both Sweetly Sings and Mary demonstrated to new audiences the relevance of historical events and experiences in an engaging, highly effective way. Many of the themes explored – including poverty and inequality – remain social issues affecting communities in Greater Manchester and the wider north-west today’.

"Working with the Oxford historians allowed real-life historical settings and experiences to become the inspiration for storylines, characters and dialogue developed by the group and allowed audiences to see many of their own contemporary feelings and experiences reflected onstage. MaD is now planning further performances using modern history as a starting point."